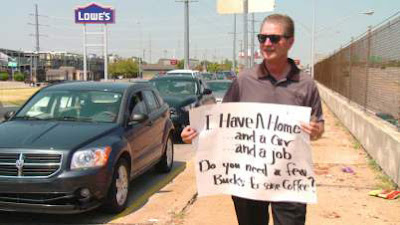 A man identified as Doug Eaton recently made a surprise gesture on his 65th birthday by giving away free money to by-passers in Oklahoma.

“I asked a bunch of my friends on Facebook what should I do on my 65th and I got a whole long list of stuff,” he told KFOR-TV. “And one of my friends said, ‘Why don’t you do 65 random acts of kindness?’” – Doug Eaton

So that’s exactly what he did, spending 65 minutes standing on the corner of NW 39th Street and May Avenue in Oklahoma City, handing out $5 bills to people who passed by. He told his Facebook friends that he handed out more than $375, but the response — and the amount of good cheer he shared — was priceless.

From a distance, Eaton looked a bit like any other panhandler holding a sign at a street corner. But instead of a plea for money, his sign read: “I have a home… and a car… and a job. Do you need a few bucks for some coffee?”

Some people drove by several times, wondering if they read his sign correctly. Many people murmured “I can’t believe this” or “bless you” as he handed them the cash. Others were reluctant to take his money, and he had to tell them “It’s OK, it’s just a blessing” and explain that this was his way of celebrating his milestone birthday. “One obviously needy truck holding a family came around the second time after misunderstanding the first time, to give ME $2 just to bless ME for what I was doing,” he told his friends on Facebook. “I took their money AND gave them a $5. We kind of traded blessings.”

“I think this is the craziest guy I have ever seen in my life and it’s fantastic!” one driver told KFOR. “I am enjoying the moment out here.”

“It’s just been fantastic,” Eaton told the TV station. “Some people who don’t take the money just say, ‘Man, I love what you are doing. I won’t take it but would you give it to someone who needs it’.”

Eaton’s birthday inspiration echoes that of Robyn Bomar, who in 2010 celebrated her 38th birthday with 38 random acts of kindness and asked her family and friends to join in.

“I planned out 38 things ahead of time, just in case, but really was praying for opportunities to present themselves throughout the day,” she wrote on her blog, Mix Mingle Glow. “My husband, three daughters, and my husband’s parents joined me in the most favorite birthday of my life!”

She was so moved by the outpouring of support that she started The Birthday Project, an online community of people who celebrate their special days by paying their good fortune forward.

The 65 minutes spent handing out money wasn’t Eaton’s only random act of kindness for the day. According to his notes, which he posted to Facebook, he also said “keep the change” when he paid $50 for his $12 haircut and $10 for his $1.09 cup of coffee, bought lunch for several diners at a local restaurant, and gave bus fare to a stranger and his daughter, among other things.

“This day has been one of the biggest blessings of my recent life,” he told his Facebook friends. “I don’t know if I can wait until another birthday to do this again. But what if it became a habit? Or what if everyone or a lot of people did their birthday number of random acts of kindness on their birthday? How good would that be?” ( Yahoo News)