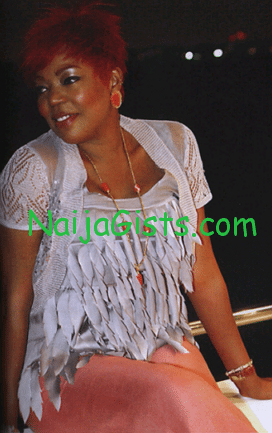 Being the second daughter of this filthily rich mogul, Biola enjoyed so much respect within the social scene. Add that to the fact that she is known to be her father’s favourite child, she had the world at her feet and bestrode the social scene with so much fanfare and dexterity that she was a rallying point for a lot of Lagos big girls.

Biola who was schooled in England is a very reckless and carefree lady as her relationship with alcohol and chain smoking contributed to the collapse of her marriage to her then husband Mr. Johnson of the popular Johnson family of Lagos.

She gladly relocated to the huge imperial Okoya estate where she called the shots as executive director of Eleganza Industries Limited. Biola teamed up with her aunt, Wosilat Okoya who was then not living under any man and her step mum Sade and the three became the perfect party glamazons.

The Okoyas are known for their lavish ‘owambe’ parties and these three musketeers were the perfect hostesses and it continued for years until personal interest surfaced and their union collapsed ceremoniously.

Biola was at that time friends with so many big girls as she was a reputable style icon whose fashion credentials were arguable. She joyfully graced the front cover of every lifestyle magazine on account of her foxiness in exhibiting the latest fashion trends.

Amongst her chain of friends were Nike Osinowo, ex-beauty queen and wife of Globe Motors boss Nkiru Anumudu and they all turned out at parties looking drop-dead gorgeous until the impending disaster rocked their boat of friendship.

She was known to be dating the Lagos big boy, Dr Tunde Soleye who was more known for his skirt chasing antics than the medical profession. She infact sat on his laps at a public event and this caused a major uproar in the media as he was still married to his long-suffering wife as at then.

Biola not only made the affair public but also regaled her friends of the doctor’s legendary generosity as Tunde Soleye is known to oblige his harem of concubines with whatever they ask for.

He spoilt them with lavish gifts of all sorts and practically brought the world to their feet. Unknown to the rather lousy Biola as she told her friends of this five-star life he was giving her, Nike Osinowo was plotting seriously to dethrone her in the heart of the doctor.

Nike, a legendary schemer who never misses a target came from the back and not only snatched the generous doctor but ended up marrying him in some very funny circumstances in a Magodo hideout. The former beauty queen known for her spiritual potency went further and practically expelled Biola Okoya from the social scene. Biola was very close friends with Nkiru Anumudu but today Nike and Nkiru are like Siamese twins.

Biola was already finding the home front very hot as Sade had also stolen the heart of her father who used to spoil her (Biola) with anything money could buy. But Sade smartly crept in and asserted her dominance in a manner that still baffles the entire social scene.

Most big girls posit that even though Biola was a style arbiter of note she was not street-credible, a term used to describe society ladies who were versed in the world of juju, so she could not fight and win her lover’s heart when faced with the kind of fight she was engaged in for Soleye’s heart. Gradually but very steadfastly she lost not only the moral clout to make public appearances but also the financial wherewithal to fund her endless Versace lifestyle.

News emerged in all major tabloids about her debts as she was owing top shop owners of luxury goods she had bought from them with some even making threats. Biola was very close to Senator Ita Giwa and infact ensured that Mama Bakassi was always at their ‘owambe’ shindigs, but today Nike is rather a favourite of Ita Giwa as she sat with Nkiru Anumudu at the senator’s red ball party very recently where they discussed very intimate gists.

In the Lagos social scene, there is never any concrete loyalty. Biola had to disappear from the scene and for years remained in the UK only returning to the country once in a long while and of course in her absence a lot has happened but the good news is that Biola is back and looking even more refreshed than ever.

She is a master planner in the social scene and she made a grand entry back to the Nigerian social scene via the now controversial one million pound 50th birthday party of society overlord, Fifi Ejindu.

Biola who wore a lilac evening gown that had exotic and intricate detail, sporting a new hair cut, was one of the august guests at the historical bash in Dubai and she now looks more urbanely sophisticated.

She was also at the Alakija’s party recently with her clique of friends and they sure had a fabulous time. She is obviously choosing her gigs as exclusivity has always been her thing and many are religiously watching to see if Biola Okoya will reclaim her exalted position within the Lagos social establishment while many are saying:“BiolaOmo Baba Olowo Is Back!” (Credit: Global News)