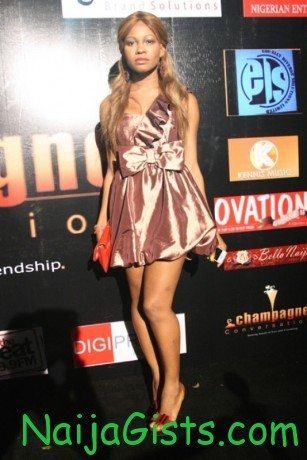 Growing up in a family where music was virtually the only bright spot in a tripartite existence that revolved round home, school and church, it did not come as much surprise that Susan Oluwabimpe Harvey now known as Goldie chose to be a singer, songwriter and performer.

If it was to give vent to a childhood social denial, available indices indicate that Goldie is making a resounding success of her career choice. If it was to prove to her hitherto unbending dad that her sometimes rebellious streak as a teen was just a quest for her true essence, she has equally succeeded. And everybody must indeed be very proud of this young lady because less than five years into her musical odyssey, the crown of Nigeria’s nonpareil pop diva now nestles snugly on her golden mane.

Since her emergence onto the pop culture radar a few years ago, Goldie has cut large swaths though the fields of musical accomplishments; exemplifying a special conception of musical heroine who can say or show anything while providing a view of the bold, confrontational and liberated woman. Colourful and cerebral, Goldie’s musical strength and depth, sensuality and serenity have appropriated her as the high water mark that other female singers have to live up to. Add to that mix the fact that the multiple awards-winning singer has created a smouldering, public persona that borders on the eccentric and eclectic, otherwise creative and precise, but engaging enough to keep you talking about her. Despite the mixed reactions to her musical style and outré outlook, Goldie has fitted perfectly into the role of Nigeria’s most consistent female performer of the moment.

Indeed, in the case of talent and passion, the apple does not fall too far away from the tree. Goldie was born In the early 80s to very educated and successful parents – her mum, late Mrs. Olabisi Betty from the illustrious Olaiya family in Ijebu, Ogun State was a former managing director in a bank, while her dad, a native of Ikole-Ekiti, Ekiti State, also retired as a director in a new generation bank. He is now into full time clerical works in Lagos. The first of four kids, Goldie’s education began at the Green Springs Montessori Primary School and then St. John’s College, Palm Grove, Lagos where Christian Religious Knowledge, she said, was her favourite subject because she didn’t have to study too hard to pass it. In fact, by the age of 10, she already knew so many bible verses that belied her age.

She recalled, “My childhood was very interesting but regimented. My Dad was a leader in church and very active too while my mum used to lead the choir. So, as their first child, I took very active roles in all church activities – drama, choir, bible classes and so on. Church was the only social life we had. On Mondays, we went for bible classes; Wednesdays were for prayer meetings and then one Friday in a month, we went for vigil. I never had toys or friends because my father thought they would lead me astray.” Thus, her mum was her closest friend. However, the bond that held mother and daughter together snapped irretrievably in 1994.

Goldie described her mum as a woman of high intellectual and moral values. “She was the first to have a scholarship in her family. She was an avid reader and had a lot of certificates and degrees.” Every night, when every other person had gone to bed, Goldie and her mum would stay up chit-chatting and watching television. She was the only friend Goldie had. But she died too soon after a long-drawn battle with cancer, leaving behind four kids. “It was a traumatic experience for me especially because it was like losing my only friend and confidant. I cried bitterly and even up till now, over a decade later, the pain of her demise has not left me.” Goldie is however consoled that she now has another mum in her step-mother who she describes as God-sent.

How She Started Her Music Career

A prodigious kid with a strong flair for the arts and everything creative, Goldie recalled drawing sketches of anything that caught her fancy but whenever her dad saw her drawing, he would tear it, asking rather erroneously how many people have achieved outstanding success in arts. This however did not deter the blithely ambitious young lady from wanting to give vent to her dreams because like the cliché goes, music expresses that which cannot be put into words and cannot remain silent. Goldie had found music through the prism of divas like Celine Dion, Mariah Carey and Toni Braxton. And even at that age, she was already learning the style and nuances of pop, even emulating Braxton’s style of keeping her side burns oiled.

At that time too, it had become pretty obvious that Goldie was an embryonic diva. “I’d been flirting with music all my life. I don’t remember exactly how old but I was incredibly young when I knew that I’d go into some form of entertainment. Everybody who knew me back then knew that I could sing because I was always singing in school or church; I’ve always had that artistic flair.” So, when she got to the UK where she had been admitted to study Business Management at the University of Sunderland, she and a couple of friends formed an informal group which performed for friends and family. The group even did a couple of demos which never really made it out.

Interestingly, Goldie’s return to Nigeria in the mid-2000s did not quite signal an immediate take-off for her career. Rather, she concentrated on building her date-reminder services business. In the course of this, she needed to do a jingle and was introduced to Mani of Cool FM who bowled her over with his production aplomb. They talked about music and what they’d like to achieve. The young lady evinced unadulterated passion and determination which prompted Mani to introduce her to industry players. Then, she met renowned producer, OJB Jezreel who would produce her first single, Komole.

This was followed by three other singles Spin Me, Nothing has Changed, and Shift, which all formed part of her compilation CD. Since then, there has been no stopping her. Through the turbulence, drudgery and seeming imperviousness of the music industry, Goldie held her own, talent for talent, and creativity for creativity. After a tentative management deal in 2009, Goldie was signed on to Nigeria’s foremost music label, Kennis Music in 2010.

A few months later, she released her debut album, Gold, which given Nigerians’ apathy towards pop music, has been a critical success. The album exudes the audacity and flamboyance of Goldie, and has spewed a couple of provocative, smart, and infectious videos; You Know It, JawoJawo and DTMB (Don’t Touch My Body) The 3 songs are now certified street anthems with increasing followership. “For me, the clothing, the props, and the creative direction must be properly coordinated because I want my fans to have very specific imagery in their head when they’re listening to the music and watching the accompanying video.” Continuing, she says, “Entertainment as a whole has gone visual. The best way to sell yourself and your music is to make a video… I will say for the record though, that I love shooting music videos, that’s one of the highlights of being in my profession; I like bringing my fantasies to life. A good music video is just one of the many ways to do this.” Little wonder, the video for ‘You Know it’ won the best female video at the 2010 SoundCity Music Video Awards and also picked the award for best use of costume at the Nigerian Music Video Awards; while DTMB picked up best Afro Pop video at the 2011 Nmva’s.

A movie buff and avid reader, when Goldie is not in the comfort of her home, she is making good music at the Kennis Music Studio. Though a nocturnal person, you can hardly find Goldie at Night clubs because she believes in channelling such hours into creative engagements.

Goldie is an ambassador of Project Alert, a world renowned not for profit organisation aimed at advocating Zero tolerance to all forms of violence against women and young girls. This rare honour was bestowed upon her after the president of the organisation saw all the charity works she had been doing on her own.