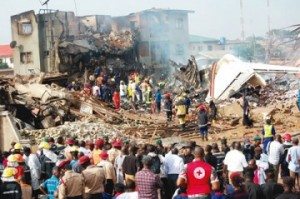 The latest aeroplane crash is a tragic / the most recent plane crash incident that happened on the 3rd of June 2012 in Lagos State Nigeria.

The Dana Aircraft packed with 153 passengers crashed into a building in the wee hours of that Sunday morning according to NaijaGists.com news.

The Latest Plane Crash incident brought sadness into the heart of many Nigerians because of the circumstances surrounding the crash.

The pilot of the crashed Dana Airplane was to leave Nigeria to the United States on that Sunday.

Several family members were reported to have been involved in the crash.

In another development, the name of the victims of this latest aeroplane crash has been released.

The Dana Airline involved in this ghastly crash has been grounded until investigation in completed.