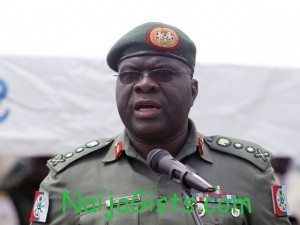 As we count our loses today, the 15th of December 2012, another bloody day in the history of Nigeria, we can now confirm that General Andrew Azazi, the former NSA to the Presidency (Jonathan ex-National Security Adviser) is dead. naijagists.com

General Azazi’s death was confirmed today by NEMA official who confirmed they have launch a team to recover the wreckage of the helicopter that crashed into the river today.

According to the state’s police spokesman, all the dignitaries on-board the aircraft which include Kaduna state Governor Patrick Yakowa and Azazi lost their life tragically today few minutes to 5pm.

May the Lord grant his family and loved ones the fortitude to bear his untimely loss and may his soul continues to rest in perfect peace.

We are still unsure what caused the crash but investigation is still ongoing.

Stay in touch with naijagists.com for update on this developing story.

One thought on “General Andrew Azazi Is Dead: Died In Bayelsa Helicopter Crash”