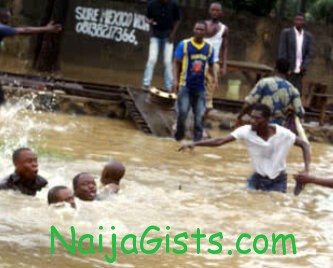 Heavy Flood continues to ravage communities across the country, a traditional ruler in Ndokwa area of Delta State has reportedly drowned during evacuation from his domain. His identity is still being withheld on traditional grounds. naijagists.com

The mornach was allegedly drowned when the boat he was being evacuated in capsized. His death brings to three persons that had drowned in the state since the flood started on September 17.

The tragic news came just as about 7,000 persons were yesterday discovered to have been trapped by the devastating flood in Ewulu community, Aniocha South Local Government Area of the state. The victims are calling for government’s intervention in evacuating them to upland. Daily Sun observed that the access road to the community had been completely submerged. However, the people resorted to using locally made canoe to evacuate whatever they could salvage of their property to the upland.

It was gathered that the state Deputy Governor, Professor Amos Utuama had visited the community and was said to have directed the Ministry of Transport to make vehicles available for the evacuation of victims.

But as at the time our correspondent visited yesterday, victims had resorted to self help due to the absence of government logistics. Although, there was yet to be resettlement camp close to the community, the Commissioner for Information, Mr. Chike Ogeah who also visited the pathetic scene assured that necessary steps were being taken to provide relief materials and rescue the trapped victims. Ogeah also re-echoed the call on the Federal Government to take urgent steps to provide alternate route to access the eastern part of the country as the flood is gradually encroaching on the busy Onitsha-Asaba-Benin expressway.

Many shops, hotels, motor parks, government offices, retail outlets, shacks and makeshift structures had been submerged by the flood. Flood victims from displaced communities are in the meantime also taking temporary refuge along the expressway at the risk of being run over by heavy duty vehicles.

The victims, who seemed so attached to the left-over of the property, are obviously reluctant to register at the resettlement camp opened by the state government at the St. Patrick College, Asaba. As a result of the flood, the road evokes the image of a beleaguered island as it is surrounded by water on both sides, threatening to submerge the road.

Ogeah pleaded with the Federal Government to immediately put machinery in motion to arrest the trend, warning that the East would be cut off from other parts of the country as a result of the rising water level. “The Federal Government should address the surging flood in Delta especially the Asaba-Onitsha Road which is in serious danger of being cut off. Should that happen, the Eastern part of the country will be severed from the Midwest,” he stated.

The commissioner also appealed to the Federal Government, donor agencies, NGOs and well-meaning individuals to come to the aid of the state government in providing succour to the victims. Meanwhile, Governor Uduaghan has directed political appointees to return to their local government areas to assist in the evacuation and rehabilitation efforts.

He said during a meeting with members of the flood disaster committee, political appointees and Heads of Personnel Management (HPM) of the affected local government areas, that those trapped in the flood must be evacuated within two days.

In particular, he said a comprehensive report of the flooding detailing every community affected, number of displaced persons, those trapped, casualties, rehabilitation camps; problems and challenges faced should be made ready within the same period.

He noted that the welfare of the displaced persons was paramount to the state government, stressing that his administration was putting everything in place to make the rehabilitation camps conducive. Governor Uduaghan called for assistance from different organisations, corporate bodies and NGO’s to contribute their quotas to alleviating the sufferings of the displaced people, explaining that the burden was too heavy for government alone to bear alone.

“We are asking for assistance from other organisations and groups because everybody needs to be involved whether they are from the affected areas or not,” he stated. “So far I have refused financial assistance from people, if any group or person has money to help the displaced people, they should convert it to tangible goods,” he said.

Speaking further, the governor said it was also the responsibility of the local government councils to provide for the displaced people in their jurisdiction decrying the nonchalant attitude of most of the councils to the disaster.

While briefing the governor on the activities the flood disaster committee, the chairman of the committee and deputy governor of the state Prof Amos Utuama (SAN) said the flood situation in the state was getting worse as almost all the coastal areas have been submerged. He noted that the committee had visited the affected coastal areas, opened rehabilitation camps and ensured that the relief materials were distributed to the camps. ( Daily Sun Report)