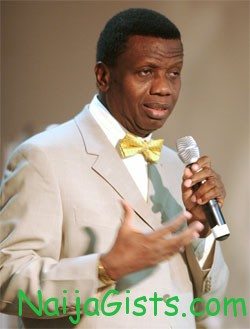 It is not a secret that the Redeemed Christian Church of God (RCCG), the church with probably the largest congregation in Africa, does not support its workers who marry another woman while their wife is either still alive, divorced or otherwise; and its pastors who had tried such got the boot and recently, the list has been swelling on a daily basis.

Pastor Komolafe‘s case may be one of its kinds considering the church’s stance on such issue. It happened that the pastor, who serves at Province 6 Festac area in Lagos, has been married for more than five years without a child and about two years ago, he caved in to pressure from family and friends and decided to take another wife.

He was said to have had a low-key marriage with the lady without his wife’s knowledge and the marriage we learnt has produced a child, while the wife at home is still looking on to God for the fruit of the womb and thanking God that her pastor husband is understanding, seven years on.

The man we learnt has been able to keep the issue of the second marriage secret away from both his wife and the church, knowing fully that the knowledge of such affair by the church or the wife would bring to him public disgrace, given that such incident that had happened not too long ago in the church had seen one of the interpreters of the general overseer kicked out of the church.

The condemnation that trailed the decision of Pastor Ituah Ighodalo, who decided to remarry about seven years after he divorced his wife, has yet to die down. Pastor Ighodalo, then the presiding pastor of the Church of God Parish of the RCCG had decided to remarry after separating from his first wife who was not able to give him a child. And the church authority labeled such act immoral and the pastor whose parish was said to be one of the fastest growing parishes of the church was dismissed from the fold. Subsequent actions are now history.

Though Pastor Komolafe’s long kept secret is still not open to the church and the wife, it is sure he will get the boot from the church, while he will definitely get hell from the wife who has constantly believed that his husband is God-sent. (culled from Global News Magazine)