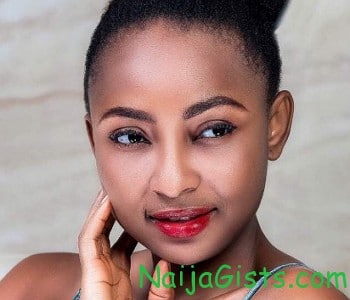 Belinda Effah was born on 14th December, 1989 (29 years in two months time) in the Niger Delta state of Cross River. She was born and raised in the midst of  thirteen siblings. She started her education at Hillside International Nursery & Primary School, Port Harcourt, Rivers State, where she acquired her primary education.

At the secondary level, she attended a military school; Nigerian Navy Secondary School in Port Harcourt, Rivers State. She proceeded to the University shortly after obtaining her senior school certificate. She obtained her bachelors degree in Genetic and Biotechnology from the University of Calabar, in her home state of Cross River.

At age 16, in 2005, Belinda made her way into the entertainment scene. She featured in a popular Television Series, Shallow Waters. After her role in Shallow Waters, she took a break from acting, and subsequently auditioned for a position in Next Movie Star, a popular reality TV show. Belinda came fifth overall in the show and earned herself the admiration of many people across the country.

Belinda Effah later took up the role of a TV presenter with popular music cable channel, Sound City. Some years later, she resigned her position at Sound City and subsequently launched a show, Lunch Break with Belinda, which was her own Television Show.

Today, Belinda is one of the fastest rising stars in Nollywood and with the rate she’s moving, she’ll become an A-list Nollywood actress in few years time.

Who Is Belinda Effah Husband

The relationship status of Belinda is unknown. Some years back, there were strong rumours that she was having a romantic affair with actor, Daniel K Daniel. Their relationship, reportedly, ended around April 2015, when Belinda got pregnant for another man. The man in question was only identified as being her sugar daddy, who is based in the United States. His actual identity remains a mystery.

Belinda, reportedly, gave birth to a bouncing baby boy in early February, 2016 in the United States. She was able to conceal her pregnancy from the public, until she put to bed.

No, the actress is not married, yet. She once stated in an interview that, she would have no problem settling down with a fellow actor. She is also a known anti-divorce advocate.

The promising actress was born into a large polygamous family. Her late father, Chief Asido Bassey Effah was a commander in the Nigerian Navy.  According to Belinda, her dad was a very strict disciplinarian, who imbibed the culture of discipline and hardwork in all his children. The actress’ father died towards the end of 2015 and was buried months later on April 22, 2016, in Calabar, Cross River state. The burial had in attendance many top dignitaries, including some of Belinda’s friends and colleagues in Nollywood.

Belinda’s mother, on the other hand, is alive and doing fine. She is 61 years old today. The actress threw a surprise birthday party for her mother last year, to celebrate her 6th decade (60th year) on earth. The birthday party had in attendance some of Belinda’s friends, including the likes of Nicole Ndigwe, Moyo Lawal Mitchelle Bello and many more. We wish her many more years in good health.

A couple of years back, this beautiful actress was relatively unknown in Nollywood. Today, she is one of the recurring faces on the big screen.

The 28-year old actress who started her sojourn in acting 13 years has featured in over 50 movies, so far in her career. Some of these movies include:

The actress is relatively new in the game. She has featured more as a supporting actress than as a lead actress in her movies. Hence, her earning is comparatively low when compared to other better known actresses. According to a recent, unverified, reports, Belinda Effah has grossed $3,500 so far this year. Her cumulative net worth has been estimated at $10,000 (approximately 4 million naira). This figure is expected to multiply in few years to come.

As at the time of writing this report, the stats of her Instagram profile are outlined below.