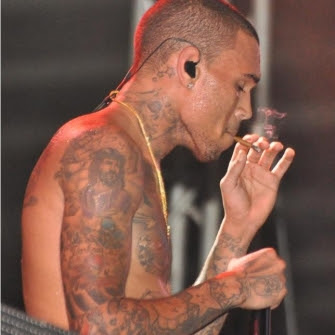 American musician Chris Brown who was paid a whopping $1 Million to perform in Accra Ghana dares his fans after he was caught smoking weed, Marijuana live on stage.

After Chris Brown failed to show up on time for the show, we learnt he walked proudly to the stage with a bag full of Marijuana. He rolled a blunt and insulted anyone that didn’t like what he was doing.

While performing one of his songs, he asked if there were weed smokers in Ghana and proceeded to say “if anybody’s tripping on you smoking weed, f**k them”. He pulled out a rolled ‘joint’ and smoked it live on stage.

It seems the guy careless what his fans were thinking.

He obviously thought they won’t do anything to him because they’re Africans.

What an insult to Africans?