Posted on August 9, 2012 by Naija Gists Leave a comment 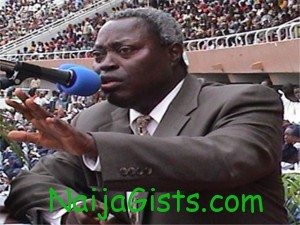 The General Superintendent of The Deeper Christian Life Ministry, Pastor William Kumuyi has broken his silence following the massacre of 19 members of his church in Okene, Kogi State, Northcentral Nigeria.

Kumuyi said the attack by gunmen was wicked and premeditated and called on the government to protect the citizens.

Kumuyi, who spoke for the first time since the dastardly incident occurred, expressed deep sadness and sorrow at the attack on Monday night on his Church during the Bible Study service.

“The attack is not only wicked, but utterly premeditated. The government should come to terms with the fact that a large swathe of people are being sent to the grave early, even as law enforcement agents seem unable to provide the required protection for all law abiding citizens. All these have implications for the progress, development and well being of the nation. Pastor Kumuyi warned that no nation could continue the way things were going in the nation.

“These killings and destruction have been going on particularly in the northern part of our country for too long. Each time they occurred, the usual condemnations are made, but thereafter, the people are left without any assurance of their security and safety. No nation can continue this way.

“It is hard to reconcile that peace-loving people, sitting in their church, and listening to Bible Study were gunned down in cold blood by people they had done nothing to provoke,” he lamented.

Kumuyi condoled with the families of all those who were killed in the attack and prayed for the quick recovery of all those injured by the gunmen, assuring that he would continue to pray for them.

He called for prayers in the nation to salvage the despicable situation at hand, saying that God would surely come to the aid of His people.

“If the body of Christians would rise up and pray, and the law enforcement agencies would intensify their efforts to combat this creeping instability, the killings and destruction in our country would be stemmed,” he said.

The cleric urged all Christians not to despair, saying that “in times like these, when there is so much fear across the land, all Christians must see it as an opportunity to  serve God more fervently.”

Meanwhile, the Christian Association of Nigeria (CAN) in Kogi has declared a three-day fasting and prayer to solicit divine intervention in the nation’s security situation.

The CAN Chairman in the State, Archbishop Emmanuel Egbunu, made the declaration in Lokoja on Wednesday when he addressed newsmen.

He was responding to the killing of 17 Christians at the Deeper Life Bible Church, Otite in Okene, on Monday.

Egbunu, the Bishop of the Anglican Diocese of Lokoja, said though the attack was not an isolated one against Christians at worship in recent times, it was a new and dangerous dimension in Kogi.

“Our hearts are heavy over the cold blooded murder.

“This unprovoked attack against unarmed, innocent citizens, right in the place of worship, leaves us in no doubt that it was premeditated, calculated and clearly targeted.

“We call on Christians to pray and fast in their assemblies between Wednesday and Friday to solicit divine intervention in our nation and state.

“This should be continued in the foreseeable future.”

The chairman reminded the killers that God would call everyone to account for unprovoked bloodshed in peace times and that no one could escape His justice.

He called on all Nigerians to turn to God in true repentance, adding that sin and wickedness constituted a reproach that could only lead to more darkness. He decried the increasing rate of insecurity and the abuse of Christian grace and forbearance.

The chairman called on people of goodwill to join in the campaign against ethical and moral bankruptcy in the country.

Egbunu commended Governor Idris Wada and the security operatives for their prompt response to the Okene killings.

He said that CAN and the Council of the ‘Ulama’ in the state were forging peaceful co-existence and urged adherents of the religions to reject evil acts.

Meanwhile, Pastor Raymond Ogunjobi, the Overseer of the Deeper Life Christian Church in the state, said that 17 persons died in the attack.

According to Ogunjobi, 15 members of the church were killed on the spot while two died on the way to hospital.

He added that 10 injured persons were receiving treatment at Okene General Hospital while eight were admitted at the Federal Medical Centre, Lokoja.

Deeper Life Bible Church has been one of the churches constantly attacked by Boko Haram in Nigeria.  The notorious sect on Thursday, 5 January, 2012 attacked aparish of the church in Gombe State, Northeast Nigeria, killing six worshippers including the wife of the pastor, Johnson Tauro, and injuring ten others.