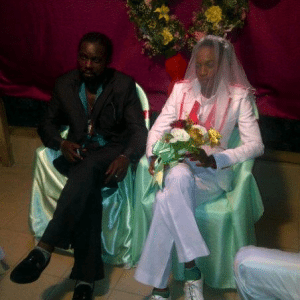 “What I have come to realize is that for loving, same-sex couples, the denial of marriage equality means that, in their eyes and the eyes of their children, they are still considered less than full citizens,” he said.

This endorsement was greeted with mixed reactions. Some were quick to label it a strategic political move for the upcoming presidential elections; as it could be said to be a tactic by the Obama camp to solicit the votes of the gay community which constitute a respectable number of the voting public. However, other people saw it as the president gradually coming out of his shell of ‘holiness’ and letting his true colours shine through. Whether a political move or a true revelation, it means little to us here in Nigeria.

I won’t be too fast to play the “it can’t happen here” card. Trends have shown that we derive most of our present day culture and behavioural pattern from the west. Slowly, but surely, their way of life creeps into our land and totally overtakes us. It is a well known fact that the world is a global village and a very small one at that; and this means that it is very easy for us to catch up with what is new and in ‘vogue’ and hop on that train.

Take our dress sense for instance; a lot of us qualify good fashion sense as the things we see on the covers of Vanity Fair, Elle, GQ etc. If Beyonce and Rihanna rock it, then it must be in vogue. How many of you here reading this now can say that Jim Iyke or Waje are your style icons? Or is it Charly Boy? We have taken the culture of the West and made it our own.

We are grateful for the present day innovations that we are enjoying in Nigeria these days, things like POS services, e-banking and the rest. All these make money transfer and collection very easy and are more examples of things that we imbibed from our Western brethren. As we ‘collected’ the good, we also collected the ‘bad.’ Now I do not intend to ruffle any feathers but to put down my opinion as it is. The idea of having same sex relationships was a taboo in our shores.

As a matter of fact, it was almost unheard of. It was also embarrassing to see guys walking hand-in-hand, it was awkward and out of place. Today, we have a society that celebrates gay relationships. It’s the cool thing for a girl to have female lovers and guys to have male partners. If a survey were to be carried out among sexually active Nigerians between the ages of 18-25, we’ll discover that at least 1 in 5 have had relations with those of same sex.

No, it didn’t start here. We saw it on our screens, in the movies, in the tabloids, on our computers as we surfed the net and that ad popped up to show two ladies kissing. As the worlds get the more connected, those of us with frail cultures get sucked into the powerful ones; and we lose our sense of identity and become just a citizen of the world.

America has legalised same sex unions. I daresay we should be expecting reports of the first gay marriage ceremony in Nigeria soon. After all, Naija no dey carry last.(article by Kelvin Igbodo)