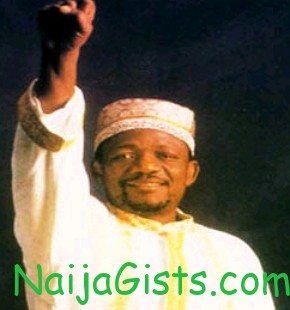 Admire their talents, envy them for daring to be what we can’t. When they were snatched from us by death, we felt a personal loss and showed an unwillingness to let go. And so, we transform these mere human beings into musical icons whose stars often shine in death even more brilliantly than in life. WG imagines what they would have become today if they had lived…

The Afrobeat king would have fought to legalise marijuana in the country. Not only that, Fela would be a pot-smoking, wrinkled 75-year old still performing like Fatai Rolling Dollars, to huge audiences worldwide.

His electrifying performances, seismic music and defiant lifestyle which gave him a worldwide following would have gained more prominence today than ever. Fearlessly confronting the Nigerian establishment through his music, Fela surely would have become a thorn in the flesh of the present administration’s as he was, during the dark days of the military for its inability to tackle the insecurity problem in the country, especially the infamous activities of the Islamic sect, Boko Harram. Trust him, Fela would have been the first person to occupy Nigeria, fighting against injustice and the freedom of the oppressed people

One of his fans simply enthused, “Fela would have become a deity with many worshipers.” His music indeed, would have gained more popularity just as his irrepressible rebelliousness and determination to champion the cause of Nigeria’s underdogs through his music would have earned him innumerable physical assaults, police raids at his New Afrike Shrine and numerous arrests.

But above all, Fela would have been larger than life, doing collaboration with his two sons, Femi and Seun as well as globalising Afrobeat genre. Interestingly, 16 years after his death, memories of Fela still lives on. Despite a new museum which was commissioned last year in his honour, his New Afrika Shrine, Fela’s famed nightclub, still attracts fans from Nigeria and beyond, who dance to the spellbinding Afrobeat rhythms until sunrise.

Chief Stephen Osita Osadebe would have turned 77 years of age in March, if he had not transited into ancestry. He bowed out of the stage when his music was massively gaining popularity among the elites in the society. With a career spanning 40 years, Osadebe was one of the best known Igbo highlife musicians that ever lived. But unfortunately, he died without a successor.

His most popular hit, “Osondi Owendi” released in 1984, and was remixed by late MC Loph, established Osadebe as a king of highlife genre in Nigeria. While he lived, he wrote over 500 songs; half of which were released commercially. He had been a part of the Empire Rhythm Orchestra, led by E. C. Arinze in which he had learned much of his music skills.

Osadebe’s style which included social commentary, similar to, but not as confrontational as Fela Kuti’s formed part of the elements that stood him out among his contemporaries in the highlife genre.

If for anything today, Osadebe would have either made more hit songs, or taken highlife music to its greatest heights. His usual manner of carrying his audience along, allowing room for ‘people on the dance floor’ to indulge in the songs would have edified by now. But despite the insinuations that his career had reached its zenith before he passed on, it’s arguable however that the Osondi Owendi exponent was ready to surmount all the odds in order to still be relevant in the nation’s music industry.

One of Osadebe’s last albums, “Kedu America”, was a testament to the unwavering powers of his creativity. But his death, which occurred in far away Connecticut on May 11, 2007, due to severe respiratory difficulties ended the journey of 40 years. He’d still be playing the field and adding to his giant brood as he pushed 77.

The demise of Ezebuiro Obinna aka Dr. Sir Warrior, will continue to astound the entertainment industry any time it is remembered. He was one of the most influential musicians to come out of the Igbo nation and the leader of the famous Oriental Brothers International Band which ruled the Nigerian highlife music scene for several decades.

Born in Umuhu, Inyi-Ogwugwu in Agbaaja, Mbaise. Sir Warrior started his music career as a part of the most successful bands in Nigeria in the early 1970s, the Oriental Brothers International Band. At a time of immense loss and great struggle after the civil war, the Oriental Brothers offered a rare light of hope to the Igbos.

The first split within the group occurred in 1977 when founding members, Dansatch Opara and Prince Ichita left to start their own bands under the Oriental Brothers moniker. The Opara brothers later joined The Oriental Original.

While Warrior lived, he was indisputably unbeatable. His discography was luminous with over 100 tracks that continue to be great hits any day. He had about 12 platinum and 10 gold hits in his career. His 1978 album, Nwanne Awu Enyi went gold, selling more than 7.8 million copies.

He was immortalized with the Imo State Heartland FM (100.5 MHz)dedicated to playing his evergreen songs. But unlike Osadebe, Warriors has since resurrected in two of his sons, Uche Obinna and Ajuzieogu Obinna and his brother, Emperor Teddy Obinna who have taken after this magnificent maestro.

Believe it or not, if he had not succumbed to death on June 2,1999, Warrior would not only have given highlife music a new meaning in the country, he would have been fascinated to see his two sons take after him. Besides, he would still be a much-sought-after highlife maestro in the country. But like his fellow highlife artistes noted, “ since his exit, it has been difficult to get another person with similar qualities as Warrior.”

He towers among the giants of contemporary Nigerian musicians. With his signature fusion of reggae, highlife, Afro-funk, traditional melodies and rhythms, the catchall description “Ozziddi”, Sonny Okosun was a force to reckon with, in the nation’s music industry during his lifetime. He used his music to tackle head-on the most incendiary political and social issues gripping the African continent, especially the now abolished apartheid in South Africa.

Born in Enugu, on January 1, 1947, Okosun launched into stardom in the early 70’s with his fiery Oziddi music, in an era when highlife music was at its peak of popularity. He first started with Help then Fire in Soweto. But his music, which took the country by storm, and which was acclaimed to be his best, was Papa’s land. He was a strong voice and advocated a popular ideological struggle in the fight against apartheid through his songs.

While he lived, Okosun maintained a high profile at world music festivals across the globe. Though, he used the last days of his life to win souls for Christ as an Evangelist. His death which occurred on May 24, 2008, in Washington D.C, after battling colon cancer, marked the end of an era for a man who dedicated his life, fighting for the oppressed in the society.

If he had been alive today, Okosun would have made the difference in the nation’s music circle. Perhaps, he would have either set up a contemporary music school that would immortalise his ‘Oziddi music’ .

Even in death, Orland Owoh’s music has continued to take a top spot in the catalogue of brilliant, locally-made music; music that captured the pulse of the ‘independence’ generation; with a firm grip on the core elements of traditional African lifestyle, history, lore and idioms.

With a story to every song, a musical ensemble uniquely his, a queer baritone voice like no other, and a dramatic private-public life, Owoh who died on November 6, 2008, stayed on top of his game, remaining relevant through different era, and eventually influencing a generation of musicians who continue to derive inspiration from his timeless pieces. Indeed, like never before, Owoh would have continued to inspire the young musicians.

Thanks to his “Iyawo Olele”, a parody of the cheating wife, which was reworked by Nomoreless and dozens of present-day musicians. Kangaroo, an excellent cut whose beats and chorus have been sampled by many Nigerian and Ghanian musicians were some of his contributions that would have still made Owoh relevant in the present music indsutry.

Also, many of Owoh hits are still relevant today; their musical direction, their message. From Logba Logba to Ibaje Eniyan, Money Palava, Alagbon, Yellow Sisi, and Laiku Egiri, Orlando Owoh made music that can stand the test of time; music that’ll endure the most volatile changes and guide future generations on how to go about documenting a tradition musically. Orlando Owoh had over 45 albums to his name, most of them his own original compositions.

Rave singer 9ice, who is presently on a performance tour of the United states, called Owoh’s death a “tragedy”.