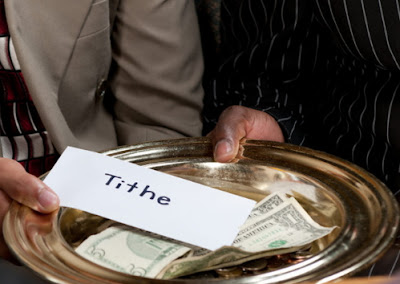 Tithing is not meant for christian. It is true that tithing was observed during the ancient isreal as commanded by God himself in the book of (malachi 3:10). In that bible verse, God told the isrealites that“ bring the whole tithe into the storehouse, that there maybe food in my house”. Now notice the reason why tithing was required by the ancient nation of isreal. God said so that“ there maybe( FOOD) in my house”.

And who were those going to eat the FOOD which reason the tithe was instituted by God and being paid by the isrealites in the temple? In the ancient Isreal, God entrusted the offering and burning of animal sacrifices to the priest to make atonement for the sin of Israelites. Animal sacrifices which blood would be poured out on the sacrificial alter by the priest to make atonement for sin was required by God for the forgiveness of sin of the isrealites.

Hence, the priests were always in the temple to serve this very purpose without doing any other secular job. They were always on ground 24/7 in the temple to offer up animal sacrifice on behalf of the isrealite. How then would this priests be able to feed themselves since they had no job except to offer up animal sacrifice on behalf of the isrealite to make atonement for there sin? It was for this reason that God demanded the isrealites to bring tenth part of there produce and present it in the temple so that there would be enough “FOOD” in his house of worship. In fact God emphasized in the book of (Malachi 3:8) that failure to pay this tithe would be tantamount to rubbing him and that whoever did that would be cursed. This provision of tithing back then thus became necessary so that the priests serving in the temple could have sufficient food to eat while carrying out there divine assignment.

So this means that as long as the isrealite continue to offer up animal sacrifices to God as required by the mosaic law or the law of moses, there would be need for tithing in the temple by every isrealites. Animal sacrifices back then reminded the ancient isrealites that they were sinners and for there sins to be forgiving, BLOOD of animals needed to be poured out to gain God’s mercy and forgiveness. The isrealites were to be guarded by the “law of moses” while performing this rituals. They were to offer to God the best of there animals to perform this sacrifice according to (malachi 1:8). Now, the book of (Hebrew 10:1) tells us that ‘the LAW, that is, the law of moses served as a shadow of good things to come’.

The book of (Hebrew 10:10) says“ we have been sanctify through the offering of the body of jesus christ once and for all”. In fact (Galatians 3:24,25) tells us that “so the law,[that is, the law of moses] became our guardian leading to christ, so that we might be declare righteous through faith. But now that the faith has arrived, we are no longer under guardian”. Collosaians 2:14 tells us that “he blotted out the handwriting of ordinances that were against us which was contrary to us and took it out of the way, nailing it to the cross” the handwriting that were given to the isrealite were the “written law” God gave to moses to the isrealites which explained how animal sacrifices needed to be perform to make atonement for sin.

But now that our lord Jesus Christ had finally arrived to offered up himself as a sacrifice and eventually poured out his own precious blood on our behalf, he automatically put and end to the law of moses that demanded animal sacrifices for which reason we had priest in the temple in the ancient isreal. (Romans 10:4) says “christ is the end of the law”. which law? The law of moses of course, that demanded animal sacrifices from the priest to make atonement for sin for which the isrealite were commanded to pay tithe so that there would be enough food in the house of God for the priest to eat to sustain there life as they continue to perform there priestly duty in the temple. Now that christ has ended that law and has shed his own blood on our behalf, why then should there be any priest in the temple? What purpose is he serving as a priest in the temple? Jesus christ sacrifice has ended his work as priest in the temple hence the end to tithing as well.

Remember, the purpose of tithing was said by God that, “so that there would food in my house”. Since jesus christ the high priest has offered himself as a lamb that takes away the sin of the world, then to whom are the christians paying there tithe? Under which law are they doing that? The law of moses that mentioned animal sacrifices and how it should be performed by the priest, which the bible says jesus christ has already ended? The word “tithing” automatically ended along with “priesthood” when jesus the high priest sacrificed his life on behalf of mankind so that we all can gain salvation. No wonder jesus christ condemned the pharisees for tithing while they neglected the weightier matters.

But does this mean we are not required to make any donation in the church? The christian standard of contributing money or valuable things in the church is clearly stated by apostle paul in (1 conrinthians 9:7) which says “ let each of you give according to what you have decided in your heart to give, and not reluctantly or under compulsion, for God loves a cheerful giver”. This is the only standard laid out by early christian for making donation in the church as opposed to tithing which mandated the ancient isrealite to bring tenth part of there produce to the temple.

The new testament tells us that christian donation should not be under (COMPULSION). It should be according to what (YOU) have decided to give from your heart and not what you are forced to pay. But this cannot be the same as tithe which made it compulsory for you to pay. A place of worship should be supported by voluntary donation and not tithing which was a compulsory act under the law of moses that christ has already ended with his blood. First century christians were all evangelists and preachers of God’s word with no one being superior in the church.

They all worked hard physically to earn there daily bread and make there money to sustain themselves without depending on the voluntary donations made by others. Apostle paul was a tent maker. Peter, andrew, james and john were all fishermen. Even at one time jesus performed miracle that helped them to catch so many fishes they were unable to drag from the water. Luke was a doctor or a physician.

They all had job to support themselves financially while they carry on there work of evangelizing. But what do we see among so many pastors today? So many church pastors are living in shameless luxuries spending lavishly what was donated by there church members. They have so many assets across the globe and the most expensive jets that fly them around the world while they tell there congrigants that there salvation is still on the way.

This is not true Christianity. Christians need to wake up from there slumber and find out the truth from the bible themselves and accept the it , so that they will not keep paying there hard earn money into the hands of crooks that called themselves pastors while quoting irrelevant bible verses to support there outright extortion in the house of God.

[By Sunday John Aka Endurance]