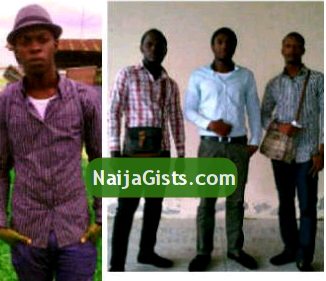 Rewind 2001: It was the eve of my mothers burial and I knew I needed to get to Uromi, Edo state where my brothers and sisters were already waiting for me with the entire extended family members.

I had a big problem on my hands as I had so much to tidy in school that day, however I was determined to leave at first light, the next morning.

I checked my wrist watch, it was a few minutes to twelve midnight, moving from the Abuja campus to Choba was another big headache. How will I be able to walk the narrow path that leads to my off campus residence which was not far from the Choba campus, I had to make a decision, take the risk and make my journey at first light or sleep over on campus and leave later than scheduled.

My mind was made up, I would walk out of campus since it was impossible to get any bike, I said a little prayer and began the almost forty minutes walk. Within the school there was security but as I got out of the school campus I could hear my heart beat.

I approached my fear: the narrow path leading to my house, this would take me about ten minutes. I entered the pathway, suddenly a figure approached from the darkness, “Who goes there?” I stopped, looked at the young man in front of him, he held a machete, I knew at this point that I needed God, “My friend, how are you I replied and brought out my hand for a handshake”

“Shut up” was the reply I heard, “we are vigilantes and I suspect you, you are a thief”, he raised up the machete, I knew that this was the point God had to intervene, i needed to be bold and believe God would protect me.

I brought down my hand from the snubbed handshake, “Oh, you are a vigilante, thank God” i said and then added “I am a student and i’m on my way home, tomorrow is my mothers burial and i need to get to my house now, i live up front”, i didn’t wait for any reply, i just walked past him, suddenly I heard another voice from behind me shout “Hold am, I sure say e get bullet for hin pocket”, the first young man walked quickly to me and tried to touch my pocket, I had money in the pocket, about N2, 500 which I intended using to pay transport for my journey and I knew that if they discovered that, the money would be gone, I hit his hand from my pocket and said this time in pidgin “My friend, I think say una say una be vigilantes, i thank una for the job wey una dey do, I don tell you before, I be student”, I walked off.

As I walked off, I heard the two of them conversing behind me, I didn’t bother to look back or rather didn’t dare to look back.

As I got to my house, I knew, I was saved indeed by God.

7th Oct, 2012 (6:18pm); I just finished watching the you tube video on my IPad on the murder of about four undergraduate students of the University of Port Harcourt, I almost began to shed tears.

I first heard of the story two days ago and the first thing I did was to begin making calls, I had lived at Aluu between 1998 and 2000, and as an old student I knew to an extent how the system works over there.

Most students stay off campus, the student lodges are usually not situated in the main villages, usually at the outskirts and though students live in some of the villages, students never, I mean never really associate with the villagers except on issues of trade and other services.

I made a few calls and began to find out more about the murdered boys, rich young kids that according to students standards, were living large. One student I spoke to said in clear terms “the boys were innocent, only unfortunate”, he added “they planned to mess them up, and they succeeded”, however, social media; Facebook and twitter which was awash with pictures of the young men, some had already passed judgement claiming they were dare devil armed robbers.

As an old student of Uniport, I have been robbed once, had friends who have been robbed, in very clear terms, students don’t rob villagers, no, the students are richer, why go for poor villagers, instead students who steal or rob prefer to rob their fellow students, that is where they hope to get something tangible, if no money, a laptop or a phone.

The point of this piece is this, I want Nigerians to begin to picture how the system works, I am not advocating for the murdered young men but all I am saying, it is high time we put an end to these atrocities committed around the Uniport environment.

Rewind 2005: She told me she was raped and identified the culprits. She was a student of Uniport. I told her in clear terms, go and report the case to the president of the Choba youths association, that some young men from Choba community broke into your apartment and raped three ladies.

One week later I saw her and asked her, “did you do it?”, she said she did but received a shocker, the youth president said, she is not the first person reporting such incidences, he doesn’t doubt her but unfortunately there is nothing he can do, they do not use their own hands to destroy their
indigenes…

I didn’t know what to say, I felt anger from deep within me, this was a rape case, how can I tell her to go report somewhere else, even the police… the case died in front of me.

Back to the Uniport killings, people who accuse the young men of being notorious armed robbers who kill, rape and maim at will are only being ignorant, they don’t know how the system works. There are countless stories i can say from a first hand experience but i know i do not have the luxury of space and time.

Nigerians must be safe in their own country irrespective of whether they reside in other peoples communities and villages, this is what government must work hard to ensure. The young men have been accused, tried and convicted in the court of public opinion, thanks to social media. Killed by locals who are the only ones that know why they were killed.

It is high time an end to these despicable killings come to an end, a popular Nigerian author once said, “Things fall apart and the center cannot hold…”, I hope it does not get to that point else everybody will be a victim…

Impossible does not exist….. I am EXCELLENCE!!!