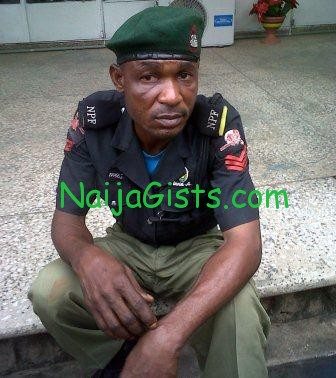 A man, Abba Gana, 43, alleged to be parading himself  as police officer and extorting money from motorcyclists and commuter bus driver at Lekki and Ajah, Lagos, southwest Nigeria, has been arrested by the police at Ilasan Division, Eti-Osa.

He was charged with a three-count charge of impersonation and fraud.

The police prosecutor alleged in charge 17/50/2012 that the accused was arrested following a complaints by motorcyclists and motorists that a man who claimed to be a police officer was arresting them indiscriminately and extorting money from them. They claimed that they suspected him to be fake.

Following the report, detectives traced him and arrested him.

After investigation, he was charged to court for impersonation, denting the image of the Nigerian Police Force and fraud.

One of the charges read: “that you, Abba Gana and others at large on 15 November, 2012 at Jakande first gate bus stop, Lekki, Lagos, in the Lagos magisterial district did falsely represent yourself as police officer with intent to defraud Okada riders.

The accused pleaded not guilty to the charge and magistrate Badejo Okunsanya granted him bail in the sum of N100,000 with one surety who must show proof of tax payment to Lagos State government.

She adjourned the matter till 6 December, 2012 for mention.

The defendant was remanded at Ikoyi Prison when he could not meet his bail conditions.(PMnews)