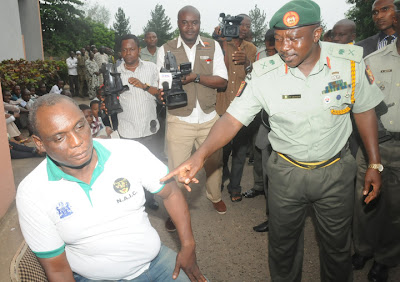 Ogun State Police command have arrested a man in Sango impersonating a Lieutenant Colonel in the Nigerian Army.

The suspect, identified as Tunde Abdul Saheed, was found wearing Army uniform with the rank of a Lieutenant Colonel.

We learnt that the suspect was arrested along with two others by a retired soldier.

Personal Assistant to the Area Commander of Sango Police Division, Detective Oladimeji Oladosu, confirmed the arrest, adding that the suspects had been transferred to the police headquarters at Eleweran, Abeokuta.

Narrating how the suspects were arrested, Oladosu said: ”There was this woman who was being disturbed on a piece of land she bought at Igando by suspected land speculators.

“One of them claimed to be a soldier with the rank of a Lieutenant Colonel and collected N30,000 from her as payment to prevent area boys from disturbing work on the land.

“They came again last Saturday to stop work on the land and this infuriated the woman who invited the police. The suspects were arrested and brought to the police station at Sango during which it was discovered that the man claiming to be an Army Lieutenant Colonel was a fake.

“They have been transferred to the police headquarters at Eleweran for further interrogation,” he disclosed.

The state police command spokesman, ASP Muyiwa Adejobi, confirmed the presence of the suspects at Eleweran.

One thought on “Fake Lieutenant Colonel Arrested In Ogun State”