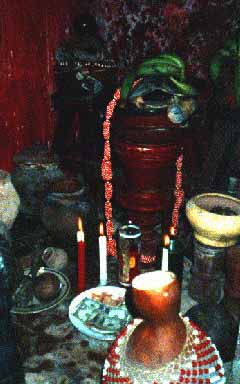 Here is the part 2 of Chuku Dalo Confession, If you missed Part one, click here to read it

WHY I LEFT THE SANTERIA SECRET SOCIETY CULT

My leaving the secret cult was a miracle.

I’m very happy for my life today because at the appointed time I will succeed.

I was delivered by a pastor named Emmanuel at a church (name withheld to avoid self-promotion criticism) in Delta State.

One day, I was summoned by our chief priest who gave me a sudden date to die.

My cult members demanded for my head.

Our chief priest who speaks for the grandmaster, the Lucifer himself has the finally authority on us.

Whatever he says is final.

I was told to start making preparations to put things in order before dying.

I couldn’t imagine myself dying just like that because life was so sweet.

The money I had, properties, connections and influence, how could I leave them like that.

When I got home that night, I resolved within myself to do anything so as to escape death.

It’s either they kill you or make you mad so that you don’t expose them.

The next day I set out for river state in Ogoni for solution to avoid death.

A very powerful native doctor in Ogoni promised to offer me a solution with a huge amount of money for preparation of charms and to offer a sacrifice to the spirit.

I went back the following day to collect the charms and to my surprise I met the native doctor stoned dead inside his shrine.

I was shocked then I went back home still determined to escape death.

The next day, I went to another powerful native doctor in Calabar who also promised to offer solution after I told him my story.

I paid a huge amount of money and the next day he told me to come back.

I went back the next day and met another shocker the man was stoned dead right inside the shrine.

I ran with shock out of the place and drove back to Onitsha still determined to survive.

I went and lie to a friend of mine who is from Delta that some enemies of progress are after my life.

He took me to a native doctor in Delta state who according to him was very powerful.

I refused to tell him what happened to other native doctors.

The moment we stepped into there, the very old native doctor told us what brought us that my cult wants me dead.

My friend was shocked because I lied to him some people where after my life then I had about three days left to die.

The old witch doctor said I needed a human head for sacrifice to do exchange for my head.

The mention of human head meant nothing to me then because I have killed a lot of people already.

So the old man told us to go and come back the next day.

The next day I went alone because my friend refused to accompany me since I lied to him first and more so because I belong to a secret society.

When I got there, I met another shocker of my life the old man again was stoned dead inside his shrine.

There was silence everywhere nobody was in sight.

It was as if everybody ran away including his servants.

I got afraid and got goosebumps all over me.

As I meant to run away, our chief priest appeared from nowhere and started laughing at me and told me I had only 2 days to die he then disappeared into thin air.

I was filled with fear then it dawned on me that it was our chief priest that was responsible for the death of all the native doctors.

I knew then that the secret cults have more powers than ordinary native doctors. I also knew that our chief priest was trailing my every move.

I got confused I didn’t know what to do, I looked around nobody was around me except the corpse of the native doctor and the human head which he was to use for my charms on the ground.

At that moment I started hearing hysterical laughter in form of a group out of both adult and little children.

Before I could run out of the place, the spirit of those I killed began to appear one after the other to torment me.

First it was my mother then my little nieces and nephews 11 of them that I killed for money ritual and that of my friend, Uchenna whom I killed in the motor accident and others I didn’t even know how I killed them.

The spirits were many and everything was happening like what we see in a film. As I ran out of the compound, they ran after me laughing hysterically at my back it was just like a horror film.

I ran very fast to where I could see people. As I was running and shouting for help people gathered unfortunately nobody could see them even as I pointed at them.

I then continued running I was shouting for help as I ran people were confused and as I was running I started hearing people clapping and singing. I ran towards the direction of the singing and I saw a church building like a pentecostal church.

I ran inside the church and knelt infront of their pastor shouting and begging him to pray for me then those spirits stopped at the entrance of the church and disappeared.

Immediately our chief priest appeared then I knew he was the one who invoked the spirits of those I killed to torment me.

He came directly inside the church and the pastor shouted at him to stop where he was that he was in the temple of God.

Our chief priest was fully dressed in our cult attire.

The chief priest shouted at the man of God to release me that I belong to them. I started begging the man of God not to relent I told him they want to kill me the next day and I don’t want to die.

The man of God has understood what I was saying then turned to the chief priest to leave me alone since I have ran into God’s hand.

The chief priest then got angry and tried to challenge the man of God with his demonic powers.

Power tussle began as the man of God encouraged the congregation to take out every atom of fear in them and pray but our chief priest was not moved by the prayers rather he laughed widely.

As the song was going on, the chief priest disappeared and the man of God asked me to confess my sins.

I confessed and he prayed for me though he was shocked that I have to join a secret cult all in the name of money.

He prayed for my deliverance after my confession. Even after the prayers, I was still afraid of the chief priest threat that I was going to die the next day.

The man of God reassured me that nothing was going to happen to me that God was in control of everything that no power of darkness can overcome the power of God.

I couldn’t go back to Onitsha because of fear instead, I slept at the ministry.

The man of God and some of his prayer warriors slept with me all through the night till the next day and nothing happened.

As fate will have it, my appointed death date came and nothing happened and that was how God delivered me from the Secret society.

I then sold everything I had and handed the money over to motherless babies home at the advice of the Pastor that delivered me.

It is true that I have lost everything but am very happy that am alive today and I thank God for everything.

After my ordeal the shame became too much for me in Onitsha and I decided to come to Aba to start a new life in Christ.

My sisters have all forgiven me despite everything but some of them are not yet out of the shock including my father who developed stroke.

Hear ends the story of my life!

Everyone to listen to this story must know that secret cult is bad.

Don’t be deceived by anybody be careful and wait for God’s time to come.