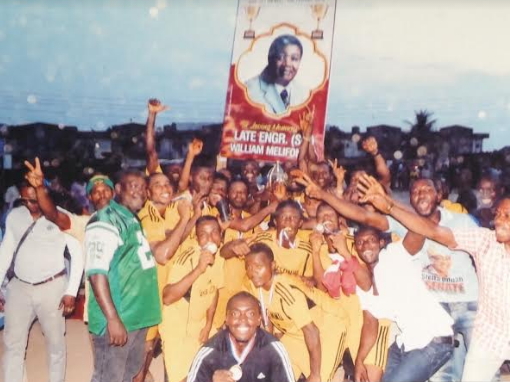 The quest by the Anambra and federal governments to search for football talents and promote sports in the country is no doubt yielding tremendous results as various groups and individuals are responding positively to such initiative.

One of such positive initiatives is the just concluded weeklong late Engr (Sir) William Melifeonwu football competition held at the Housing Estate,Onitsha.

The initiative which was sponsored by one of the late Engineers son,Chike,exposed many talented players who are hopeful of gaining national and international exposure and sponsorship.

Mr Melifeonwu in an interview expressed joy that the good spirit of his late father is identified with the aspirations of the youths who are willing to make career in football locally and internationally.

According to him,his late father was not only a renowned civil engineer but a keen sportsman and lover of football adding that the football competition was initiated also to immortalize his name.

Earlier before the finals of the contest between the Igwe Football Club of Onitsha and Ugborimili Football club of Onitsha,widow of Engr Willie Melifeonwu, Lady Barr Ngozi Melifeonwu,expressed delight that a good number of youths participated in the competition.

According to her,the organizers have decided to make it a yearly event with various prizes to go with it.
Lady Melifeonwu performed the official kick-off of the match before the teams slugged it out.

It was a robust contest as both teams fired hard volleys to outwit their rivals until it ended 1-1 draw at full time.

It was an exciting encounter which rolled into penalty kicks where the Igwe Football Club out scored the Ugborimili FC to lift the trophy.

The excitement knew no bounds as fans from both sides demonstrated spirit of sportsmanship by hugging each other and queuing for their prizes.

A special prayer was offered for the continued peaceful repose of the late Engr Willie Melifeonwu before the close of the competition,followed by entertainment. 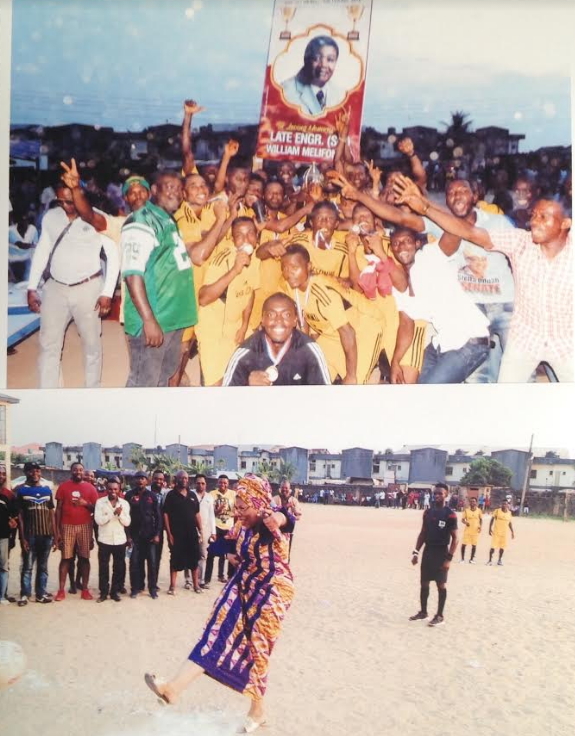 Photo shows the winners of the trophy jubilating and the kick-off action by Lady Melifeonwu.