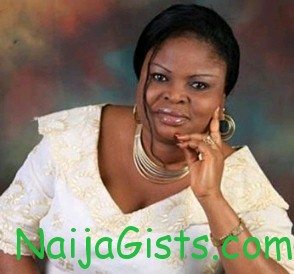 A couple of months after she was massively criticized in the media for dumping her wretched first husband, Toyin Kembi, in abject poverty, Lagos State deputy governor, Her Excellency, Joke Orelope-Adefulire, has found herself in another hot scandal.

Rumours are rife that the former commissioner did not enjoy motherly care in her teens as some children had, owing to her mother’s alleged sexcapades that separated her from her father, Alhaji Saka Orelope.

It is alleged by those in the know that after the birth of the deputy governor, her mother had another pregnancy which her father later denied the paternity. It was alleged that it was this paternity mess that separated the couple as the mother had to return to her father’s house in Ogun State.

This secret is just only known to a few in the political arena and we are told the deputy governor does not want to be reminded about this and she is doing everything to keep it away from the media. This is one of the reasons we heard she does not talk about her mother in the media.

Her aging father, a staunch politician, who lives at Idimu, Lagos, is currently bedridden and Joke is said to be doing everything possible medically to support the man as he means everything to her. Those who should know said it is her father’s political credentials that paved way for her political rise.

On the other hand, it is also alleged in some corners that the successful lady politician who prefers to be called Mrs. Orelope-Adefulire has no university degree. Those who have been trailing her since her days as the commissioner for Women Affairs and Poverty Alleviation alleged that she’s been going about with B. Sc. in view.

And for almost a decade now, the politician who has been in politics for close to three decades is yet to complete her tertiary education at the university.

Be that as it may, HP can authoritatively reveal that there is an on-going enmity between the Lagos State deputy governor, Joke Adefulire and former Commissioner for Women Affairs and Poverty Alleviation, Chief Mrs. Kemi Nelson which is gradually playing to the fore.

This was evident recently at a wedding ceremony of a Lagos-based politician’s nephew, held in Ibadan. The party was a gathering of many fine politicians which include Senator Oluremi Tinubu, Lagos first lady Abimbola Fashola, Osun State first lady Sherifat Aregbesola and many others including the warring duo.

It was noticed that during the church thanksgiving proceedings, Kemi approached the deputy governor for a handshake but Joke returned the gesture with a cold face as she only went ahead to exchange pleasantries with other dignitaries in the first row.

A disappointed Kemi who was putting on smiles had to go back to her seat in the fifth row to enjoy the rest of the programme. And the two never crossed each other’s path while the event lasted.

On what could have led to their imbroglio, we gathered that Kemi was the first to have fired the salvo when she allegedly started peddling false information about the deputy governor. It would be noted that Joke took over from her in 2003 as the Commissioner for Women Affairs.

And she enjoyed her reign for good eight years before finally emerging the deputy governor. But this is said not to be going down well with her predecessor who is said to be of the belief that Joke is enjoying too much than what she deserves. Some of this backbiting was said to have gotten to the deputy and since then we were told she has decided to stay away from her. (Credit:GlobalNews)