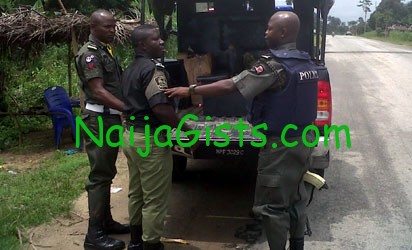 On Tueday Aug 21, 8 mobile policemen were arrested at various points between Akwa Ibom and Cross River states by a team of the Police Mobile Force, PMF, for mounting illegal checkpoints and extorting money from motorists and commercial motorcycle riders.

The Police Mobile Force team which was deployed from the Force Headquarters in Abuja to monitor compliance with the Inspector-General’s directive on discipline, went round some selected areas in the two states and arrested the mobile cops who were still flagrantly disobeying the order of the Inspector General of Police, Or Mohammed Abubakar outlawing illegal checkpoints across the country .

Abubakar had on assumption of office activated a new PMF with the mandate to arrest and institute disciplinary measures against combat policemen engaged as illegal escort, improperly dressed, and mounting unauthorised beats, among others.

The team led by the Commander in charge of Ethics, Doctrine and Monitoring, Mr. Anietie Eyoh, arrested three mobile policemen found to have violated the IG’s directive in Akwa Ibom State. And in Cross River State, the team arrested two mobile policemen who abandoned their beat at the National Independent Power Plant to mount illegal checkpoint along the Calabar-Itu expressway.

At the MOPOL 11 Command in Calabar, two other culprits were arrested within the premises of the command for improper dressing, while another, whose dressing was most appalling, was arrested outside.

Also, at the Margaret Ekpo International Airport in Calabar, another culprit was arrested for violating the rules guiding escort of VIPs which stipulates that the security personnel must not be less than two in number.

But at a Mobile Police checkpoint along the Calabar-Ikang road, the team only identified two culprits that they could not arrest because of the sensitive nature of their job in the border area.

The errant combat policemen were left in the custody of various police divisions in Akwa Ibom and Cross River State commands until further action would be taken on them.

When contacted on telephone, the Commissioner of Police in charge of PMF at the Force Headquarters in Abuja, Mr. Mbu J. Mbu, said all the culprits would be tried in-house and punished in line with police service rules.

“We have our departmental disciplinary procedure. IG made a pronouncement that had to do with dress code, that they must be combat ready at all times. These are the things that we are now trying to enforce. We have forwarded the signals to all field commanders and have given them enough time so that the men would conform with the directive,” Mbu said.

He expressed confidence that the team would carry out its duty effectively without compromising, adding that any officer who tried to induce members of the team would be dealt with accordingly.

On the issue of those who were not arrested but found wanting, Mbu said “there are some designated checkpoints. Those people may not be taken away from their duty posts because of the sensitive nature of their job, but their names and force numbers will be taken and they will be invited for trial.”