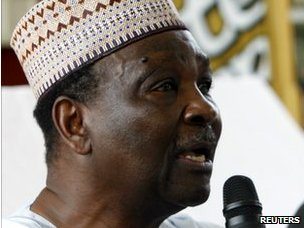 Former military head of state, General Yakubu Gowon (GCFR) Wednesday urged terrorist group Boko Haram to embrace dialogue, else, the Federal Government would not hesitate to go for the second option which is fire for fire.

Gowon stated this at the opening ceremony of the 2012 Oyo State Education Summit tagged ‘Developing A Sustainable Transformation Plan For Education in Oyo State’, held at Premier Hotel, Mokola, Ibadan.

On the education summit, Gowon expressed shock over the declining state of education in the country particularly in Oyo State.

He said, “You will not understand the shock I felt when I learnt that Oyo State was placed at 34 failed state out of 36 states in the 2011 result of West African Examination Council (WAEC). It did not sound nice and I could not believe it and I firstly concluded that it was a joke until I was made to know that that is the reality. Then, I wonder, how did things become this bad?”

He stated further: “This cannot be the same Oyo Province that was regarded as headquarters of education on whose soil the late Chief Obafemi Awolowo declared Universal Free Education which was later copied by the Federal Government and other states. Free education catapulted the West to a commanding hierarchy in Nigeria. I know that this will make Chief Awolowo turn in his grave 25 years after his death”.

He wondered where things went wrong with the education in the state, urging that the state has to look beyond the obvious in seeking solution.

He noted that an avenue must be provided where all children would have an opportunity to have education.

The elder statesman attributed the failure of education in the state to misplacement of value and urged the state government to consider taking advantage of National Youth Service Corps programe to improve education.

He advocated that youth coppers in the state should be deployed to various schools in the state to teach and charged the government to invest heavily in the restoration of infrastructure in the schools.

While warning against cultism, Gowon charged the parents to be alive to their parental responsibilities toward their children by inculcating sound value system in them that would make them to know that hard work is the only way to be successful in life.

The Chairman of the Governing Council, the Polytechnic, Ibadan, Professor Oladapo Afolabi, while delivering his keynote address, spoke of how policies of the Federal Government have not helped the educational system in the country.

Oladapo, who decried the educational policy of Fredrick Lugard and held it responsible for the problems in education in Nigeria.

He said: “The second person after Luggard is General Gowon. Sir, as you have seen it on the slide, I will not talk about it again.

“However, generally, I locate the major cause of decline in education at the doorstep of leadership. There is clear leadership deficit.”

He strongly opposed free education which he described as a system that could not bring about qualitative education in the state.

Governor Abiola Ajimobi, while responding to the advice of Professor Afolabi on free education, assured that during his tenure, there would not be completely free education.

Ajimobi quickly added, “but we must help the vulnerable people. We must help children from poor background and we must provide enabling environment for learning. Equally, we must create avenue for everybody to be the best they want to be.”

The governor, who described the summit as historic, added:”Oyo is now living as a shadow of its past. We were the pacesetters then but not so anymore. How come our children receded to the 34th position out of 36 states?

“We cannot continue abetting treachery and failure, our students are unemployable. This is a summit of restoration and restructuring. It is high time we threw overboard the practices that brought us to the state where we are. It is time for change”.

Ajimobi promised that education is among his first priority as a governor stressing that he would do his best to revamp the sector in the state.

He further promised that he is ready to implement the recommendations of the summit, stressing that he is in the office to work, serve his people and make Oyo State better than how he met it.

He said gone were the days of business as usual, pointing out that this is the time of doing what is right and doing it to the best of one’s abilities.