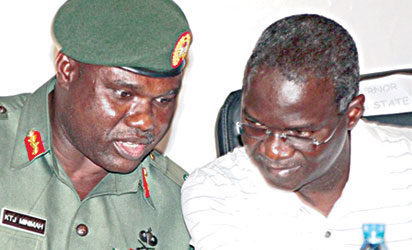 The implementation of the new Lagos Traffic Law has got the backing of the Military as the General Officer Commanding the 81 Division of the Nigeria Army in Lagos,southwest Nigeria, Major General Kenneth Minimah, pledged that the military will not only conform but will also champion enforcement of obedience to the law.

Speaking after listening to Lagos State Governor, Mr Babatunde Fashola (SAN), at an interactive session with senior army officers and heads of army formations in Lagos on the new Road Traffic law at the 81 Division Auditorium, Onikan, General Minimah affirmed that there is no reason the new traffic law should not work.

He asserted that the military formations will go beyond just obeying the law but take part in enforcing it since it is a legitimate law of the state that has passed through the necessary processes before becoming a law.

Governor Fashola, while addressing the gathering, said everyone must realise that roads are shared assets and that everyone is expected to play their individual roles in managing the usage.

He said since he was sworn in as governor he has refused to use the siren because it is part of his job to move traffic and using it will mean escaping and leaving the tax payers who employed him to struggle for themselves in the traffic.

Urging the senior army officers and heads of army formations to be part of a concerted effort to promote a culture of safety and healthy commuting on the roads, the governor recalled that as a youngster, he took public buses on trips round the state, noting that many of the military officers present would hesitate to allow their children to ride in such public buses now for safety reasons.

He said in several democracies worldwide, the military have been responsible for fashioning democracy, citing the example of George Washington who was formerly a soldier before becoming an elected President.

Governor Fashola said even in Nigeria, the military gave the nation its present democracy and stressed that there is a need to have a sustained partnership to keep the democratic experience going as it could only happen in a situation where the rule of law prevails.

Speaking on commercial motorcycles known as okadas, Governor Fashola said several people have lost their lives, limbs, arms or become maimed through the reckless activities of the okada operators.

He said what the new traffic law has prescribed is that the okadas cannot ply the major highways like Lagos Badagry Expressway, Third Mainland Bridge, Ozunmba Mbadiwe Road and selected roads and bridges in the state.

The governor said okadas and vehicles are mechanized devices which are not toys but that which requires the operators to go to the driving schools for proper certification before they can be allowed to use such vehicles to convey passengers.

The new law, according to Governor Fashola, tries to ensure that the government can set alcohol threshold for drivers so that they can take people to their various destinations safely.

He said by outlawing drinking, smoking, making phone calls or eating while driving, the main aim is to ensure that full concentration is promoted and achieved by a driver because any split moment of loss of concentration may be very fatal. (PMreports)