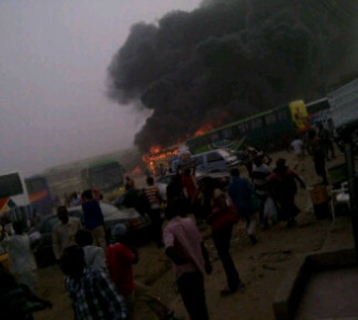 Several calls put across to the Commissioner of Police, Musa Daura, by P.M.NEWS were not answered, but the spokesman of the Joint Military Task Force in Kano, Captain Ikedichi Iweha said it would be too early to confirm the number of casualties.

However, President of Ohanaeze Ndigbo in Kano, Chief Tobias Michael Idika told journalists that the casualty figure in the attack the casualty figure is about 60, “I counted up to 60 dead bodies when I visited the scene of the incident and several people were seriously injured,” Idika said.

The scene has been cordoned off by the police and the JTF.

Residents of Sabon Gari, an enclave predominantly inhabited by non-natives are panicked as tension continues to mount in the Nigeria’s city of Kano.

The dead and the wounded have been evacuated to a government-owned hospital by security operatives.

Initial reports, quoting rescue officials put the death toll at about 20 as two suicide bombers rammed a car packed with explosives into a bus at the New Road station in Sabon Gari, a predominantly Christian neighbourhood in the majority Muslim city.

Several explosions were heard following the initial blast, sparking panic as bloodied bystanders including some with serious injuries fled the scene as soldiers arrived to cordon off the area.

Kano, the largest city in Nigeria’s mainly Muslim north, has been repeatedly targeted by Islamist group Boko Haram, blamed for killing hundreds in the region since 2009.

“I saw three buses on fire. One of them was fully loaded with passengers waiting to leave the station at the time of the blasts… There are at least 20 dead,” said the rescue official who requested anonymity as he was not authorised to speak to journalists.

“The figure may rise,” he added.

A senior security official in Kano, who also declined to be named, told AFP he believed the death toll was “massive”, describing the figure of 20 as an “understatement”, without giving a precise toll.

Fatima Abdullahi, 30, who had boarded a bus scheduled to head south, said she saw a car with two men inside ram into a nearby bus.

“There was a huge explosion followed by another. The bus went up in flames,” she told AFP at a hospital in Kano where she was being treated for her injuries.

Mechanic Tunde Kazeem, who works at the station, said he saw “people rushing out of the motor park” after the blasts, “some of them with blood on their clothes”.

There was also no immediate claim of responsibility, but the seemingly coordinated attack was likely to be blamed on Boko Haram.

It was attacked in January of last year in a blast which wounded several people and which was blamed on the radical Islamist group.

That bombing came days after the group’s deadliest ever attack, also in Kano, when at least 185 people were killed on January 20, 2012.

“Rescuers and security personnel are yet to determine the source of explosions…casualty figures not available at the moment, the seriously injured have been taken to hospital and bodies evacuated,” said a statement from the National Emergency Management Agency.

Boko Haram has previously targeted Christians, including through a series of suicide bombings at churches packed with worshippers on Sundays.

According to a statement issued in Abuja by the Special Adviser to the President on Media and Publicity, Dr Reuben Abati, the President said that the barbaric incident would not deter the Federal Government from its strong-willed determination to overcome those who do not mean well for the nation.

He said that the Federal Government would not be stampeded into abandoning its unrelenting war against terrorists in the country.

The president reassured Nigerians and foreigners in the country that government would do the needful to ensure the safety of lives and property.

He said that government would continue to collaborate with local and international partners and stakeholders to check the menace of terrorism.

The president commiserated with the families and friends of the victims of the Kano explosions and assured the Kano State Government of the Federal Government’s continued support.