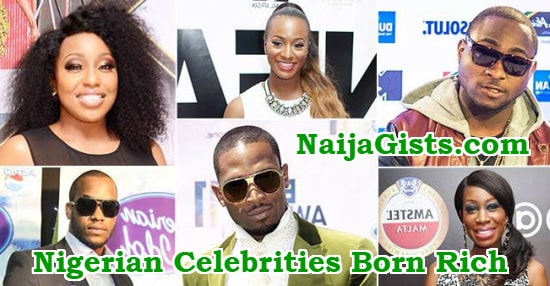 Nigerian Musicians, Artistes Who Were Born Rich And Raised By Wealthy Parents

The Nigerian music industry has removed a lot of individuals from the street and transformed them into well-to-do figures. This is often the popular story, as the saying goes – “From grass to grace”. However, to the oblivion of many, this is not always the case. There are a good number of top Nigerian music artistes who had it much easier than their counterparts while growing up. These artistes could be said to have transformed from “Grace to more Grace”. In this article, we are going to be looking at the list of Nigerian musicians who were born rich and were raised by wealthy parents.

The interesting thing is, these two artistes lived most of their lives in the US. Their father, Ademola Adeleke, is a serving senator of the Federal Republic of Nigerian and also the PDP aspirant for the Osun State Gubernatorial election, which held barely two months ago.

While Sina Rambo has been in hibernation for quite some time now, his elder brother has become a recognized face in the industry. It is without doubt that, this duo are in the industry for the fame and not for the cash. I guess this explains their inconsistency in releasing songs.

Well, many of you don’t need introduction to this tall, toned and handsome Nigerian rapper, who hails from the eastern enclave of the country. Lynxx, whose real name is Chukkie Edozien, rose to prominence in 2009, when he released his hit single titled Change Your Paradise. This was duly followed by Fine Lady, a little while later. Lynxx has not had it all rosy in the music industry of late. He, however, had it rosy while growing up. The rapper is one of the few Nigerian artistes who were raised by wealthy parents. In fact, the rapper attended the prestigious Corona Schools and Kings College in Lagos, before heading to the UK for his bachelors programme.

Lynxx’s father, John Edoxien, is a business tycoon. He was, at a time, the Governor of the Niger Deltan state of Delta. Prior to this time, he held the position of Deputy Governor of the old Bendel region, now formally known as Delta state. John Edoxien is, today, a well known figure in the corporate world. He currently holds a host of board directorship roles in various top companies in Nigeria. Of these companies, Diamond Bank PLC and Mercedes Benz Nigeria stand out.

From the aforementioned, it is evident that, the Nigerian rapper has a relatively good upbringing (financially). However, regardless of this, he has made his mark in the music industry; although, he’s been away for quite sometime now. In Lynxx’s case, it is unarguably a case of “Grace to more Grace”.

Well, this artiste was not just raised in a wealthy home, he was actually raised in a royal home (which makes him a prince). He is the son of Yoruba’s supreme monarch, the Alaafin of Oyo Empire, His Majesty Lamidi Adeyemi (the 3rd).

Tillaman debuted in the Nigerian music arena many years ago. His most prominent single to date is Ko Ma Roll Remix, where he featured some top dogs in the industry, including the likes of Trigga, Burna Boy, Ice Prince Zamani, Phyno and more. While he hasn’t been able to upgrade his status as an upcoming artiste, he definitely has his royal status as a revered prince of a Yoruba Empire.

DJ Exclusive is, no doubt, one of the top Disk Jockeys (DJs) in Nigeria. He is currently a member of Don Jazzy-marshalled Mavin Records. While he’s not a exactly a music artiste, he has a good number of music features to his credit. A prominent mention in this regard is Alhaji (featuring Tiwa Savage).

DJ Exclusive was born in the United Kingdoms to a Nigerian mom and a Nigerian dad. However, he later moved back to Lagos, Nigeria at a tender age, when he was subsequently enrolled at the prominent Kings College. After his secondary education, DJ Xculisive headed back to the UK, where he eventually obtained his B.Sc. degree.

The popular DJ, whose real name is ALAKIJA, Rotimi, is a nephew of Nigeria’s richest woman, Madam Folorunsho Alakija, who is one of the top oil bloc owners in Nigeria. DJ Xclusive’s family is, without doubt, one of the wealthiest and most influential in the country.

Ozzy Bosco is arguably the fastest rising kid-musician in the Nigerian music arena today. The kid artiste made his debut in the Nigerian music industry many years ago and while he has enjoyed a fairly good support from music fans across the country, he also has a solid home support, both materially and emotionally. Ozzy Bosco’s mother, Mojekwe Elizabeth Nonye, is a renowned business tycoon, who deals in cross-continental movement of goods.

The highly talented kid has featured in many hit songs alongside several who-is-who in the Nigerian music arena. Some of these artistes include Olamide, Mr Incredible (M.I), Flavour and more. The kid has, so far, shown no sign of stopping just yet, and with a strong and wealthy family support, he’s just about to start.

Naetochukwu Chikwe, whose stage name is Naeto C, is one of the known rich kids in the Nigerian music industry. He was, at a time, the hottest rapper in Nigeria, with his lyrically-sick flows. Naeto C rose to prominence in 2008, when he released his debut album titled You Know My P. The album featured a host of hit songs, which include Kini Big Deal and Ako Mi Ti Poju. The Nigerian rapper, who has been off the scene for a while now was born into the family of Mrs. CHIKWE, Kema, who was a former Minister, who served under President Olusegun Obasanjo. Today, Naeto C’s mother is one of South East’s PDP leaders.

The 10/10 crooner was born in the United States, before he came back to Nigeria at a very tender age. He acquired his primary and secondary education in Nigeria before returning to the US, where he attended and graduated from the prestigious George Washington University. In 2010, at the peak of Naetochukwu’s music career, he enrolled for his masters programme at the University of Dundee, Dundee in Scotland, UK.

Well, Dr.Sid is actually a doctor, literally. The Mavin star is one of the most prominent music stars in Nigeria today. He was born into the happy union of late Nigerian actor, Justus Esiri (MON) and legendary fashion designer, Mrs. Esiri.

The Mavin star has featured in many top ranking songs, over the course of his career. Some of these songs include If I Start To Talk (with Tiwa Savage), Surulere, which topped the charts of the Nigerian music arena for almost a year and many more. Dr. Sid has featured alongside the likes of Tiwa Savage, Don Jazzy, Reekado Banks and many more. He is, today, one of the chief songwriters of Mavin Records.

DJ Cuppy, who is probably the most popular Nigeria DJ at the moment is actually famous for her wealthy background, rather than her music exploits. She is the daughter of billionaire oil tycoon, Femi Otedola. DJ Cuppy is, no doubt, one of the richest music artistes (by background) in Nigeria.

Although, the beautiful DJ is not your typical music artiste, she has a host of hit songs under her belt. Of these songs, the most prominent is her single, Greenlight, where she featured Tekno. One interesting thing about Cuppy is that, she is known to shuttle between the UK and Nigeria, and her cross-continental adventures are definitely not funded by her “DJ money”.

DJ Cuppy, whose original name is Florence Otedola, moved to London, UK at a very early stage of her life. She later enrolled at Kings College in London, before  moving down to the United States, where she enrolled for a masters programme in Music Business, at New York University, United States. DJ Cuppy obviously had one of the most enviable childhoods, among her counterparts in the music industry.

Banga Lee, as D’Banj is fondly called, is one of the most popular Nigerian music stars. In fact, he’s arguably the most recognized Nigerian artiste in the international music scene. The famous artiste’s father is a highly decorated Nigerian Army Officer, who goes by the name Colonel OYEBANJO, Duro.

D’Banj, whose actual name is Oyebanjo Oladapo, has, so far, had an enviable career in the Nigerian music industry. He stands toe-to-toe alongside legendary artistes like 2face Idibia, Mr. P & Rudeboy. He has carved his name in the sands of time and his case can be said to be that of “Grace to Greater Grace”.

Save the best for the last right? Well, you got it! Davido is unarguably the most vocal rich kid in the industry. The self-acclaimed OBO – Omo Baba Olowo, rose to prominence about seven years ago, with his hit single titled Dami Duro. He is today one of the biggest acts in, not only Nigeria, but the entire Africa. Davido’s father Adeleke Adedeji, is a popular Nigerian billionaire, with diverse interests in oil and gas, construction, energy, education and more. In fact, Davido’s billionaire dad recently acquired a private jet, which is rumoured to be worth billions of Naira.

Davido, whose real name is David Adeleke, was born and raised in Atlanta, United States. He later moved to the UK, after his poor academic performance at Oakwood University in Alabama, where he was enrolled at the time. Davido, however, later moved down to Nigeria, where he, eventually, obtained his bachelors degree, from Babcock University. It was gathered that, Davido’s father singlehandedly paid for the construction of a music department, just so his son could study and become a graduate. It is no lie to say that, Davido is the richest artiste (by inheritance) in Nigeria today.