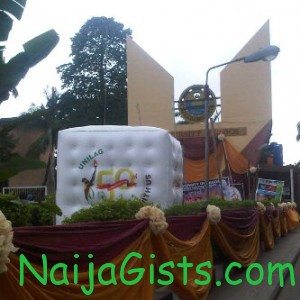 Students of the University of Lagos, UNILAG, Akoka, Yaba, were in a high mood last Saturday when the school celebrated its golden jubilee.

As part of the celebration was a well attended carnival. Some of the students, who spoke with Campus Square, expressed their joy at being privileged to witness the institution’s 50th anniversary celebration, stressing that the school has lived up to expectation as a 50-year old institution.

“I’m glad that UNILAG is celebrating her 50th anniversary while I’m still in the school. It’s a great institution and it has become a brand name, it also means many things to many people and to me, it means one of the best around,” says Eppele Kingsley, a 400-level Engineering student.

On his part, 300-level Creative Arts student, Moses Uzobulu, said the students were celebrating 50 prestigious years of hard work, excellence and brilliance which have been the hallmark of the school over the years.

Osita also believes that “UNILAG is among the best three schools in the country and it has proved to be a school of first choice for me anytime any day.”

“We celebrate the carnival yearly and fortunately, it collided with the school’s 50th anniversary this year, so it’s a worthwhile celebration for us. It’s also about celebrating Africa as an entity because UNILAG portrays the true African culture and environment,” explains Oyadotun Samuel, another Creative Arts department student.