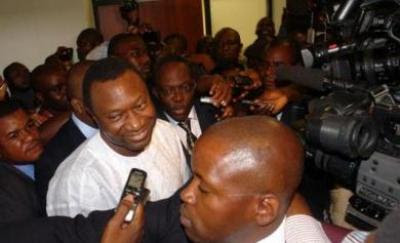 Robert Igbinedion, a Lagos based lawyer vows to offer free service to EFCC in the prosecution of Femi Otedola who was involved in bribery with Farouk Lawan.

According to an interview the lawyer had with Daily Times News on Wednesday, Robert Igbinedion said he has sent letters to EFCC’s chairman and the acting Inspector General Of Police signaling his intention to take up the prosecution.

“The letters were sent about two weeks ago, but I’m yet to receive a reply from any of them,” he said.

Igbinedion explained that it was necessary to get an instruction from the government functionaries to prosecute the businessman.

“The matter is on their table for now; it is when they fail to prosecute or instruct us or somebody else to prosecute that we can now compel them to prosecute. But we can get to that point,” he said.

The lawyer accused Otedola of attempting to scuttle investigations into oil subsidy and operations in the oil sector.

“He (Otedola) is the first to come out in the open to scuttle the investigation, because all he is doing is an attempt to blackmail the House (of Representatives) and scuttle investigations,” he said.

Otedola is currently enmeshed in a bribery scandal, following an alleged $3 million bribe he negotiated.

The oil magnate claimed to have given a $620,000 bribe as initial payment to the Chairman of the House committee on Fuel subsidy, Farouk Lawan to exonerate himself and his companies from indictment in the investigations into the oil subsidy scam involving oil importers.

On the ongoing bribery scandal, Igbinedion labelled both Otedola and Lawan guilty.

He, however, said that his focus was beyond Otedola.

“My intention is to attack those that claim to be high and mighty who have stolen our oil wealth,” the lawyer explained.

According to him, not much success has been made in the country’s purported fight against corruption, in spite of the huge budget going into funding anti-graft agencies.

He said, “Nigerians have lost trillions, but they still go ahead to spend millions on prosecutors and yet, nothing to show for it. So I’m offering my service so there will be no more cost on the masses.

“And the conviction we will be asking for will not be child’s play, like two months that will be spent in hospitals. We will be asking the court to give 50, 70 years’ jail term.”

Igbinedion also stressed the importance of an effective judicial system in curbing crime and violence.

He noted that indigenes of the country’s oil-rich Niger-Delta region went to court several times to challenge the activities oil companies in their area before seeking other alternatives.

“They were denied for many years until they decided to take up arms, and the government listened to them,” he said.

“A few can’t be buying yachts and private jets with people’s money, yet people go to bed hungry. We need to bring the hunger and anger of the Nigerian masses to the court.”