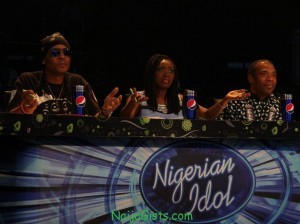 Love is in the air: What is happening between these two reality show judges?

These two Nigerian reality TV show judges are both superstars in their own rights, highly idolised for their musical prowess, and it looks like the Valentine love bug has caught up with them, judging from their on- and off-screen behaviour recently.

One judge recently returned from a month-long tour of a foreign country, and during that time, a well-known rap artist took his place. His return caused a lot of excitement on the reality singing competition, and one of his co-judges in particular seemed a little too happy that this judge was back.

“She was practically in his lap,” said one close source from the show, said about the other judge. The tweets from Twitter were even more blunt, with viewers blaming drugs for her romantic mood, but it seems it was simply because she could not contain her giddy excitement that her partner in music was back. At one point, this judge put her diva hat on and belted out Whitney Houston’s ‘All the Man I Ever Need’ with full force, leaving her reality show heart-throb speechless. There were lots of giggling and excitement as well as plenty of whispered conversation, quiet asides, and hyperactivity on her part throughout the show, and it left the audience and the viewers to wonder. Both judges are sexy, free, and single, and from the looks of things, definitely ready to mingle, with the male half recently getting a divorce last year.

The third judge must have felt quite lonely… Who do you think they are?

The power to decide the fate of one of the contestant lies in the hands of you, Nigeria, so vote by texting the number of your favourite contestant to 33680, from any network. You can also vote for a contestant by dialing his/her number of any using an Etisalat line.

The top prize for this season is worth a superb $100,000, in which the lucky winner will get: 7.5 million naira in cash, a recording contract also worth 7.5 million naira, and a brand new SUV. Runner-ups will not be left out as they will be given prizes to the tune of 10 million naira.

Visit https://www.Nigerianidol.com/ for compelling back story videos, juicy behind the scene news, and get a taste of what is coming. For the latest information, Like the Nigerian Idol Facebook page www.facebook.com/NigIdol, and follow Nigeria Idol on Twitter at www.twitter.com/NigerianIdol–and you could be eligible to win some fantastic prizes including the opportunity to be live in the studio for a recording.

Nigerian Idol is the biggest music show across Africa and is brought to you by Etisalat, in association with Pepsi and supported by Beat FM.