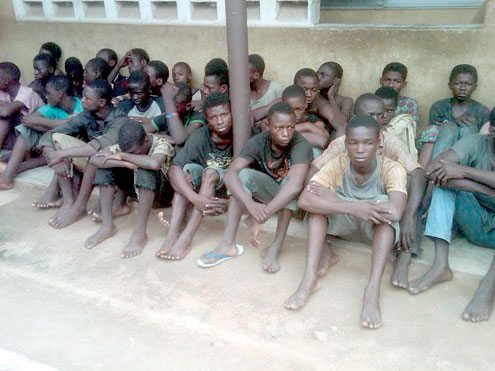 According to the taskforce, the suspects are touts are between the age of 13 and 17 and have been sleeping under the bridge in Oshodi where they allegedly snatch people’s handbags and other items during the day and at night.

The juvenile suspected hoodlums came from states, such as Ogun, Osun, Ondo, Oyo, Akwa Ibom, among others.

They have been kept in protective custody of the taskforce at Alausa, Ikeja.

Taskforce Chairman, Bayo Sulaiman said the baby touts were arrested under the bridge as their presence in the place constituted nuisance and security threat, saying that many of them were already wild.

“These are mini-criminals. They are being used by the big touts. They snatch bags, handsets and other items from the public. If at this age, they don’t have parents and they are as wild as this, they will turn big ones in the future.

“They don’t even know their states or parents. Members of the public who know them should come for them as the Juvenile Court is on vacation. We cannot continue to keep them here,” he said.

Sulaiman urged any member of the public looking for a missing juvenile to check the taskforce office to see if their wards are there.

According to him, the raid will be a continuous one, saying that the state government did not want anyone to stay under the bridge and snatch people’s bags again.

“The arrest of these people has been constant. Sometimes we even arrest underage pregnant girls under the bridge,” he stated. Sulaiman said the juveniles arrested could not be taken to the juvenile homes being run by the state government because the juvenile court had not given the order yet as it was not sitting.

“We cannot charge them to court now because the court is not in session. They cannot go to the juvenile homes without the pronouncement of the court. We are only keeping them inside our compound,” he said.

One thought on “JTF Arrest 19 Kid Hoodlums Under Oshodi Bridge”