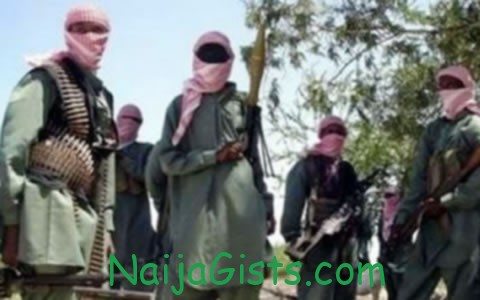 In the past years, our dear country Nigeria has been besieged by corruption, violence , executive, legislative and even judicial lawlessness. But nothing compares to the current siege we are faced with in the form of terrorism, being spearheaded by Jama’atu Ahlis Sunna Lidda’awati Wal-Jihad (People Committed to the Propagation of the Prophet’s Teachings and Jihad).naijagists.com

The sect is locally known as Boko haram, a Hausa appellation for western education/civilization is sinful. While boko haram continues their killings and wanton destruction unabated, the federal government of Nigeria, headed by Mr. Goodluck Jonathan appears totally clueless, helpless, lacking in imagination and bereft of any idea with which to curb this scourge.

Boko haram, according to Wikipedia, became active around 2002, in Borno State and their ideology is basically religious fundamentalism. The founder is believed to be Mohammed Yusuf, who was extra judicially murdered by the Nigerian police in their custody in July 2009. After his death, Abubakar Shekau took over the leadership of the group and his reign as leader of the sect has been nothing short of bloody. The man seems to enjoy bloodletting.

The death of Yusuf has seen a serious escalation in the boko haram scourge. This puts a dampener on the sincerity of the Nigerian authorities about bringing an end to Boko haram, as every senior figure arrested since the onset, have either mysteriously died in custody or have disappeared after they have been arrested.

Let us examine what may be the objectives of Boko Haram. A Terrorist, as defined by the concise oxford dictionary is a person who uses violence and intimidation in the pursuit of political gains. While terrorism is defined as the use of violence and threats to intimidate or coerce especially for political purposes. We can safely conclude therefore, that terrorists are basically politically motivated, but use religion as a vehicle to drive home their agenda.

Also if we look at religion over several hundreds of years, we can safely conclude that terrorism is not necessarily a problem found in a particular religion, but has been used by so many political figures to pursue their dreams of an utopian age.

Terrorists who claim Islam as Religion have always predicated their actions on a few verses in the Qur’an but mostly use the hadiths to back up or justify their evil agenda. One of such is found in Sura 61:10-12 ‘’jihad is the best method of earning (blessing), both spiritual and temporal. If victory is won, there is enormous booty of a country which cannot be equalled to any other source of income. If there is defeat or death, there is everlasting paradise…’’ . Sura 47 also see Allah commanding Muslims to smite the neck of anyone who did not accept the teachings of islam. What those people will not however tell you, is the context in which the sura was written.

I can show several verses in the bible, which the crusaders between 1095 – 1291 misapplied to wreck havocs in the middle age otherwise known as dark ages. There is also the issue of 72 virgins. From various studies carried out and literatures available, there was nowhere in the Qu’ran or hadiths where the no 72 was mentioned. Several Islamic scholars including the American female Islamic scholar. Lezzley Hazleton have disprove that fact. The word translated as virgin is houri or dark eyed beauty was mentioned 4 time in the Qu’ran and it could have as well been a sign of purity.

Also studies, shows most of these commandments to fight were written in the hadiths at a time when Islam needed to spread and the entire Arabia was inhabited by pagans. Therefore the Muslims were encouraged to fight to protect themselves and to spread their religion. Of course cowards and bigots misused these suras to bomb innocent women, children and defenseless men in churches and marketplaces in times of relative peace.

Fundamentalists basically latch on to a set of religious quotes, often out of context, and always attempt to force their code of conduct and principle on everybody within their sphere of influence. Fundamentalists can be found in every religion, although in varying degrees. In Christendom, you have various sects. Some very extreme i.e. National Liberation Front of Tripura is an explicitly Christian terrorist group, forcibly converting people, the Christian Science, the latter day saints (Mormon) etc. Some of these sects may not be violent as it were, but they broke from the mainstream and adopted strange ideologies and appear to impose themselves on the mainstream Christians.

The Islamic fundamentalists on the other hand, are a different ball game, they seek to propagate their brand of Islam forcefully. Note also, that they do not accept nor respect mainstream Muslims. Check out the Taliban in Afghanistan; they seek to impose their laws on all and thereby wish to bring everybody along with themselves to the dark ages. In sura 2:256 the Qur’an states ‘’let there be no compulsion in religion’’, but these lots completely ignore Allah’s command. They prefer to continue with their ill thought out but extremely bloody campaigns to the detriments of modern civilization.

In Hebrew 12:14 the bible teaches ‘’Follow peace with all men and holiness, without which no man shall see the Lord (emphasis mine). Also in John 18:10-11, during the arrest of Jesus by armed men, we saw the Lord Jesus rebuke Peter for using his sword, for Jesus knew that he who lives by the sword, shall also die by the sword. It is therefore amazing when I hear or read very senior church figures in Nigeria, calling out their followers to retaliate and kill Muslims. I ask? Which Muslims? Is it the poor ‘’mai suya or mai shai’’ on the street or the cowardly but dangerous but faceless terrorist that hides and covertly blows children and women up? If you succeed in killing your peaceful Muslim neighbours, will that end the reign of terror as represented by boko haram?

Make no mistake about it, I am as saddened and angry as the next man about the senseless waste of lives and properties, but I also understand that the enemies are not my Muslim neighbors. If I must fight, I understand that according to 2 Cor 10:14: ‘’the weapons of our warfare are not carnal but are mighty through God. Note also that fundamentalists assume they are doing God a favour. John 16:2b Jesus told his disciples ‘’a time shall come when whosoever kills you will believe he is doing God a service. No God will ever ask people to kill for him. I therefore posit without any fear of contradictions that those so called men of God calling for war are not speaking for Jesus; they are on their own.

Before you get on my back, I concede that we have had religious conflagrations in the past and I had also been a victim in Kano 21 years ago. While I do not support religious violence, I make bold to say that what we currently face is not mere religious skirmishes– we are at war with terrorists and terrorists world over are dangerous and brutal. Their end game is political domination. You may ask why target churches? The answer is simple: to provoke Christians and create mayhem. Note– ours is a peculiar setting and If that worked, and Muslims probably win, they will proceed to deal with the Muslims too, like they did in Afghanistan, where Muslims were forced to practice a form of Islam that is barbaric. Terrorists fear neither God nor respect any religion. Their aim is strictly political and economic domination.

Rather than engage in petty fights as Muslims and Christians, it is pertinent we call on the federal government of Nigeria, with a security budget of N1trn in its kitty, to ensure our lives are truly secured. I remember vividly, that during the OBJ years, some Christian leaders made stringent insinuations that ‘Al quaeda’ was in Nigeria, specifically around Bauchi and Plateau states; training would be terrorists on the mindless art of killing many.

But the government turned a deaf ear. We also recall that before the recent bombings in Zaria, Kaduna state, security was abruptly withdrawn from the affected church, hours before the attack, despite protests by the church leaders. What is the government hiding from us? Also do not forget that we have been informed by government that some masterminds or kingpins of boko haram have been arrested. But as I write, not a single breakthrough in terms of information has been mined from those arrested. Rather, we have watched as all suspects have mysteriously died in custody.

Finally my advice to my Muslims brothers and sisters especially from the North is for us to foster a better understanding with our Christian brothers. Let us stand united and show those cowards that we will not let them push us into a senseless civil war. And to my fellow Christians– be sober, be vigilant for our adversary the devil moves around like a roaring lion, seeking whom to devour (1 Peter 5:8) Remember the weapons of our warfare are not carnal. Do not let any man push you to where Jesus has not asked you to go to. We do not war against flesh and blood and our enemies are not the Muslims. Our enemies are spiritual. Take charge on your knees. Be wise as serpents and be gentle as doves.

5 thoughts on “Boko Haram: Why Do You Have To Kill In God’s Name?”