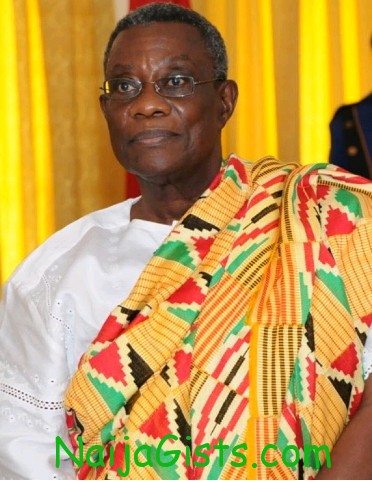 Ghana began three days of funeral rites for late president John Atta Mills on Wednesday, with his body to lie in state ahead of his burial to be attended by foreign dignitaries including Hillary Clinton.

The death of Mills on July 24, five months ahead of polls in which he was to seek re-election, threw the West African nation into mourning and upended the presidential campaign in a country that recently joined the ranks of the world’s significant oil producers.

An official cause of death has not been given, though there have been unconfirmed reports that he suffered from throat cancer.

A state funeral service and burial will be held on Friday, with Mills’ body to lie in state at the parliamentary complex in the capital Accra beginning at 12:00 pm (1200 GMT) on Wednesday.

Tributes are expected today and Thursday evenings, including music and speeches.

Some 16 heads of state in addition to other foreign dignitaries, including the US secretary of state, are expected at the burial service, according to chairman of the funeral committee Kofi Totobi-Quakyi. Clinton is currently on an African tour.

Mills, the first Ghanaian president to die in office, is to be buried on the grounds of the seat of government at Osu Castle in Accra.

The capital has been filled with tributes to Mills, who was widely praised for his integrity, including billboards saying “we shall always remember you,” while residents could be seen wearing wear black and red bands and scarfs as symbols of their grief.

“The outpourings of emotions on the death of our president show that we Ghanaians are united in our collective sense of loss,” Totobi-Quakyie said.Accra police commissioner Patrick Timbillah said heavy security would be in place for the funeral, with major roads cordoned off.

Totobi-Quakyi said the family will hold a private service in Mills’ place of birth on Sunday in the village of Ekumfi Otuam.

Ghana is seen as a bastion of democracy in the often turbulent West African region, and the transition so far has gone smoothly.

Mahama, who had been vice president, was sworn in to serve out the remainder of Mills’ term hours after his death, as dictated by the West African nation’s constitution.

The new president is expected to be endorsed by the ruling party to run in the December election, which analysts say is likely to be close.

Ghana, a country of some 25 million people, joined the ranks of the world’s significant oil producers in December 2010. It is also a major producer of cocoa and gold.

The country has begun producing oil from its offshore Jubilee field, one of the largest discoveries in west Africa in recent years. The field’s operator Tullow has estimated that the field’s recoverable resources amount to up to one billion barrels.