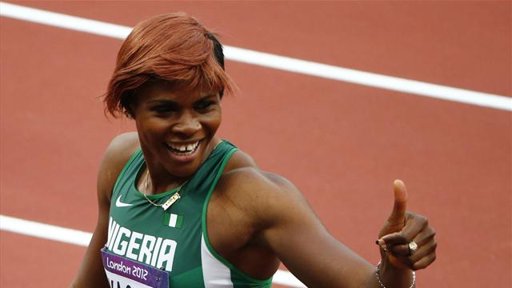 Nigeria’s national anthem rent the air yesterday in Moscow, courtesy of the brilliance of Blessing Okagbare who won silver for the country.

Blessing who went into the world athletics championship as Nigeria’s biggest medal hopeful did not disappoint in the long jump event as her leap of 6.99 was good enough to give Nigeria silver.

Blessing had after her long jump feat vowed to give Nigeria another medal in the women’s 100 meters event whose final comes up today. The Sapele girl alongside her compatriot Gloria Asumunu last night qualified for the semi final.

Okagare running in heat 5 came first returning an impressive time of 11.03 seconds, while Asumunu made it to the semi in heat 4 with a time of 11.27 seconds finishing third. The semi final of the women’s100m semi final event comes up 12.30 pm Nigerian time with the final billed for 6.50 pm.

Olympic champion Usain Bolt lived up to his billings in the men’s 100 meters event winning gold in a time of 9.77 seconds under the rain.American Justin Gatlin won silver in 9.85 and Bolt’s countryman Nesta Carter took bronze in 9.95.