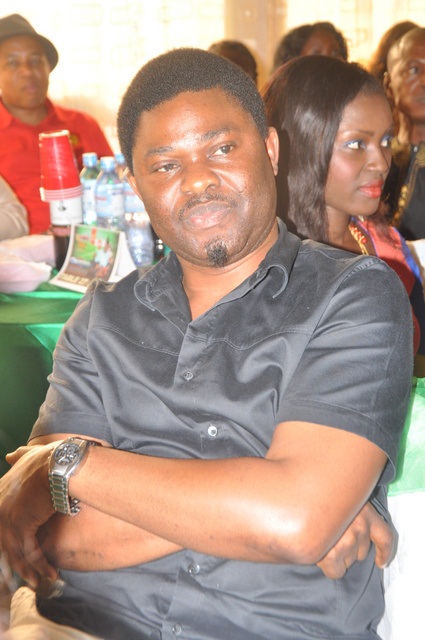 Tell us a little about your childhood, growing up, parents, brothers and sisters?

My growing up was fantastic because I have a good childhood upbringing. Playing dirty at times, with my age mates was one of the interesting fun I can remember. My family consist of my parents, 3 boys and a girl. Being the last child, I was really dotted on. My brothers introduced me to the cinema house and movies. I became a film freak, and despite my father objection to film watching became an ardent disciple thereby becoming interested in film and motion picture as a whole.

What was the first paying job ever that you had?

I worked in a Bank as a Banking officer.

How much were you paid per month and what were the responsibilities?

N2,500.00. I was only taking care of myself, mother and supporting my siblings.

What other jobs did you do outside Acting?

I invest in honest, viable and profitable businesses. I am what so others will call a business tycoon.

What made you go into the Acting career and when did you start Acting (year)?

The world of ‘film making’ got me hook, line and sinker, coupled with inner talent that was struggling within me then. I went through vigorous self teaching research on what acting was all about, via film watching, review magazines, flipping through articles that bother on film acting or film making, and when opportuned, visited film sets/locations. I started acting professionally in February 1995.

Who were your Idols/Models (Actors) in those days?

What was your first role in Theatre, TV or Movies?

My first role was lawyer Tunde Smart, in the movie titled Bekunpe.

What were the constraints you had to face and overcome as an up-and-coming young Actor ?

The first was not been able to negotiate my fee because the producer sees you as somebody he or she is trying to helping. They see the talent but no justification for negotiation.

How many films have you been involved with as an Actor to date?

As a DYNAMIC, OUTSTANDING, ‘A’-List Actor, how have you managed to adapt to the different range of roles you have played in your career?

By doing my homework, a lot of research and studying people of different occupation and lifestyle I meet closely. Most importantly, I demystify myself before taking a role.

What is the most awkward or strangest role you have had to take/play in your career and why?

Playing a disabled persons role in Kunle Alajeseku. I wanted to be in the disabled peoples world and feel what they feel every time. The pain and agony they go through silently in my opinion can never be measured. I know because I have had a glimpse and believe me they deserve our care, attention and love.

What film have you been most proud to be involved with so far, and why?

JOMBO. I was proud to take the lead role in the film Jombo because it gave me the avenue to play a bad guy in a really sadistic way, far from how some actors have played the role in the past.

Did you at anytime want to quit your Acting career for something else or for a reason, and why (if any)?

I thought of quitting when I was ban from acting by my association (A.N.T.P) for having the effrontery to query the executive committee of non-chalant attitude towards artist welfare, and questioning the reason for the association (A,N,T,P) collecting money from producers before he or she could role camera without any support from the association. I basically felt that the executives in the association ‘ruled’ and didn’t ‘Lead’. The issue of members taking work permit before acting was also inclusive.

What is the motivation for you or what keeps you interested in this career every morning you wake up?

Firsly, because I enjoy what I am doing and its challenging. Secondly, because I strongly believe that better and brighter days are coming soon.

How important are our Nigerian roots, morals, values, knowledge and sense of wisdom to you and your works? Everything that has to do with my roots and culture is very important to me because it is what tells the outside world that I have an identity, and I try as much as possible to show that unique identity and wisdom to the outside world through films.

On the stories, scripts, or screen play of your films, and its impact on the Nigerian/African cultural values (home and abroad), how do you manage to harness, keep and pass them across in your films?

Basically, the three element of entertainment are to inform, educate and entertain, which we so much keep in our works (films) that anyone from any race would not want to learn. The way we dress, the way we speak and the way we relate to our fellow human creature is important to me.

What projects are you working on at the moment and with whom?

JOMBO II, with Binta Ayo Magaji. Another with Dimeji Ijaduade, and another with Bolaji Amosan (Mr Latin) friends with alpha vision.

Where do you see yourself in this career in the next five years?

Where do you see the Nigerian movies industry in the next couple of years?

If all various fractured associations could come together under one umbrella then the sky will be a stepping stone not the limit to our peak. fractured When you are not working (Acting, producing, directing or making a film), what do you do or how do you pass the time?

I do a lot of thing, for example visiting places, hanging out with my friends, playing games, visiting the gym, writing, watching films and praying.

What kind of music do you listen to and who is your favourite musician?

Various forms of Music that suits my mood at the time, from High Life, Juju, Fuji, Gospel, R&B to Jazz. Some of the Artists I listen to are Yinka Ayefele, Lionel Richie, R Kelly and Remilekun Amos.

Is there an International Actor (American, British, Australian, African, etc.) you will want to work with if the opportunity presented itself?

What message do you have for your international fans in America, Europe, Africa and its Diaspora?

They should all keep spreading the good news now in the film industry, the emergence of Nollywood, and to stay tight with one another. Remember no matter where we go (Nigerians, Africans, Afro- Americans, Jamaicans, etc), we are brothers. I love you all.

For any reason at all, how would you personally want your fans to remember you?

I just want them to remember me for my good works, what more can a Man want!