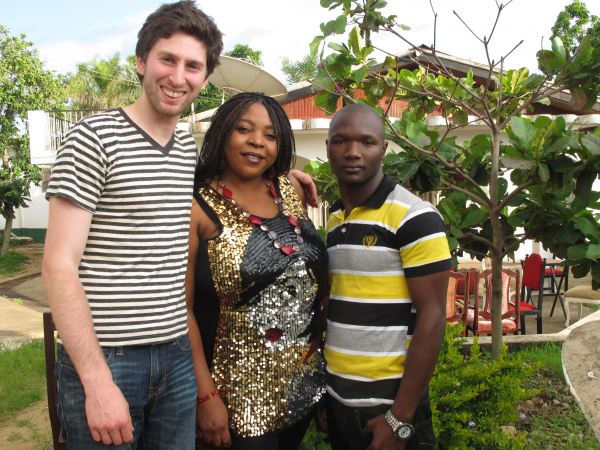 “Welcome to Naija,” my driver Thomas says as I reach the end of the customs maze at Abuja’s Nnami Azikiwe International Airport. After a warm handshake, we depart immediately for Jos to avoid the dreaded rush hour traffic jams that gridlock highways for hours on end.

My maiden impressions of Nigeria come in fleeting moments through passing glass. Hawkers carrying wares as varied as eggs, belts and board games slink from car to car seeking eye contact. Brightly clad women balance oversized cargo on their heads and swaddled babies on their backs. Gaggles of waving children greet my pale skin with nervous smiles and cries of “Bature!” More churches than convenience stores. The stoic visage of President Goodluck Jonathan gazes from a billboard screaming “Let’s shun all violence!”

The Plateau State security presence is stifling. We pass through no less than 15 checkpoints enroute to Jos, manned by grim-looking soldiers hoisting AK-47s. I am expecting to have to bribe my way to Jos, but the officials let us pass with surprising ease.

“They are not giving me any trouble because they see you and Search’s name on the car,” Thomas says. “They see you as an important mediator who has come to end the conflict.”

We navigate a maze of potholes, passing the conflict flashpoint of Riyom on the approach to Jos. Thomas gravely informs me more than 30 people were killed in Fulani night raids there the week before.

Although the communal clashes in Jos are often framed as interreligious, the conflicts’ roots lie in competition for political power and economic resources distributed through patron-client relationships along exclusionary ethnic lines. The indigeneship policies that extends civil and political rights only to predominately Christian Berom, Anaguta and Afizere ethnic groups disenfranchise Hausa and Fulani Muslims, many of whom have lived in Jos for generations. In turn, many indigenes view the Hausa and Fulani as foreign settlers who are seeking to displace them physically, politically and culturally, as they already have been linguistically with the adoption of Hausa as lingua franca.

Jos simmers with tension ahead of elections and political appointments spark protests by slighted sides and counter protests by supporters. Escalation into violence has fueled a self-perpetuating cycle of indiscriminate reprisal attacks that ensures new victims and vengeance-seekers. The first SFCG initiative I will contribute to is a series of interreligious conflict management and good governance workshops for key actors in Jos, including youth leaders, teachers and women’s groups. Our hope is that attendees will establish vital cross-cultural connections and impart the strategies learned to their communities to defuse conflicts before they descend into violence.

The recurrent violence has touched everyone here. Joshua, a SFCG driver who has become a good friend, recalls a harrowing trip into town to buy potatoes following the 2008 elections. As the vendor packaged the vegetables, Joshua felt a premonition that he should leave. He followed his gut and found himself confronted with a machete-wielding mob that would have hacked him to death had they known his religious affiliation.

“I drove my bike very slowly through their ranks and stayed calm so they could not tell if I was Muslim or Christian,” he says. “As soon as I got to the main road, boom! I drove as fast as I could. I saw smoke coming from the city behind.”

Joshua knows others who escaped harm by playing dead in roadside gutters until the mobs had passed. Another close call came during the same crisis; a youth drew a gun and tried to shoot him in the face. The gunman couldn’t operate the locally made weapon, enabling Joshua to flee to safety.

During my first week, I also befriend Godwin, a bright-eyed fellow DJ who cleans the SFCG office three times a week. Godwin’s house was burned to the ground three times during the violence, the most notable time coming during the 2001 crisis that shocked the nation with its indiscriminate bloodbath.

“I narrowly escaped,” he says, methodically sweeping the floor. “I saw many corpses on the ground. It affected my brain. My parents used to say I am sharp, but now I feel dull. I have trouble remembering what I read. I’m still recovering by God’s grace.”

Godwin dreams of being a surgeon, but he is unsure whether he can afford university. The black market for textbooks has priced his current class materials outside his means and his study time is contingent on his ability to borrow classmates’ books or browse for answers at an internet café. Much will depend upon the exam results he nervously awaits.

“If my result is based on what I wrote, I know I will do well,” he says softly. “But they sometimes sell the good result to another student and give you a failing one.”

The specter of Boko Haram looms large over Jos. Despite being mainly an external factor in the conflict, it is not difficult to find the northern extremist sect’s fingerprints on this sleepy ex-mining town. We pass the gutted remains of a church targeted by suicide bombers in March, held together by a haphazard wooden exoskeleton as it heals. Military patrols are common weekend sights. Sunday’s church bomb blasts in the neighboring state of Kaduna left more than 70 dead and grace every newspaper and most tongues. Whispers float on the wind. “They shot down a helicopter. Have you heard? Kaduna is in flames.”

My co-worker Patience is a fantastic cook with a big smile and a taste for American pop music. Without luck or the grace of God she cites, she would have perished in the March attacks. Boko Haram destroyed her COCIN church during the 7 am service she regularly attended, but she was running late that day. Her neighbor came to see if she was ready and Patience told her to go ahead, she would meet her there. It was the last time she would see her neighbor alive.

“No, no, not anymore,” Patience says when asked if she still attends church on Sunday. “But this is what Boko Haram wants, they want to stop us from worshipping. They want us to live in fear.”

On any given day, on any given street, Jos still sports the look of the city that earned its reputation as the home of peace and tourism in Nigeria. The temperate climate and near-daily rain showers keep friendly residents boasting about its natural beauty and livability. But displacement as a result of the crises has contributed to the division of the city along ethnic lines. While Jos used to pride itself on Christians and Muslims living together, such communities are now treasured exceptions to a new rule. Divisions breed suspicions. Against Jos’ latent conflict backdrop, words that would seem innocuous elsewhere take on new meaning. “Brother you see, if you wish me well, I wish you well,” a popular song warbles from the car radio. “Brother you see, if you wish me fire, then go to hell.”

I awake to a rain-soaked morning and the sound of Godwin’s voice. He is singing a Hausa song about heaven; his rich tenor rises and falls like a gospel choir, wavering on high notes as an acrobat tests gravity. It is serene and it reminds me there are some things strife and hardship cannot tarnish.