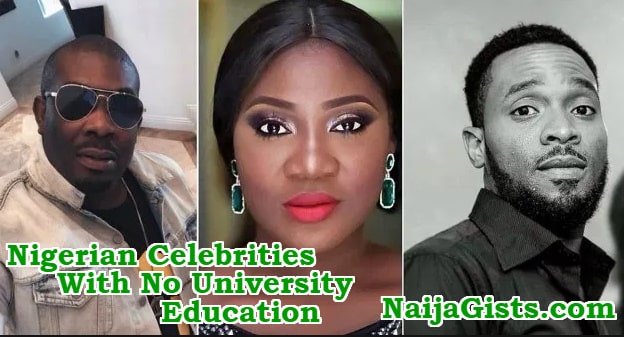 We all know the importance of education, especially a good university education in Nigeria. These days, it would appear that without one, you would not land any plum job. But we also know that there are people (not just in Nigeria) who even without a university education have made it to the top and are now very successful and are even the ones employing people who made first class degrees. Bill Gates is a perfect example of this.

In Nigeria, the case is the same as most business moguls, politicians and entrepreneurs never went to the university. In the entertainment industry, such instances abound too. We have some celebrities who never wore the graduation gown yet are millionaires across Africa and beyond.

Let us meet our top ten celebrities who have succeeded in making a university degree appear over rated:

Chidinma Ekile: The 2010 winner of the third season of MTN Project Fame West Africa is a songwriter and singer. She is the first female to win the competition. Before she auditioned for the competition, she worked as a business promoter in Lagos. Born on May 2, 1991 (27 years), she is the sixth child out of seven children and was born and raised in Ketu, Lagos where her parents had lived for a very long time.

She is popularly known as ‘Ms Kedike’ adopted from her hit single ‘Kedike’. The diminutive singer became the first female Nigerian artiste to hit the number one slot on the MTV Base Official Naija Top 10 Chart following the release of the music video of her hit single ‘Emi Bi Baller’.

She has collaborated with several top acts in the industry such as IllBliss, Clarence Peters, Tha Suspect, Flavour N’abania, Phyno, Wizkid etc.

Judging from how fluent and outspoken she is, one would never know Chidinma does not have a university education. She had already sat for the Post UTME to study Mass Communication at the University of Lagos before auditioning for the competition. Following her advancement at the competition, she declined the admission. In an interview, she said she is very serious with education and hopes to return someday.

D’Banj: The koko master did not get (or should we say complete  his university education). Oladapo Daniel Oyebanjo was born on June 9, 1989. He is a Nigerian musician, singer, songwriter, TV personality, model and entrepreneur. He is an acclaimed African artiste whose songs have received massive airplay in other African countries such as Tanzania, South Africa, Namibia, Malawi etc.

Some of his major singles include Fall in Love, Scape Goat. He became internationally known for his 2012 single ‘Oliver Twist’ which topped the African charts and was also among the top 10 hits in the UK singles chart 2012. It also reached number two (2) on the UK R&B chart.

D’banj was ranked as the richest musician in Nigeria according to T.I.N Magazine. He was reported to be in his third year in the university studying Mechanical Engineering before dropping out to pursue his musical career.

Genevieve Nnaji: You are probably shocked that she is on the list right? Her command and fluency of the English Language does not give it way but yes, Genevieve does not have a university education.

She was born into a middle class family with her father being an engineer and her mother a nursery school teacher. She first starred in the soap opera “Ripples” at the age of eight.

She is the fourth out of eight children and attended the Methodist Girls College, Yaba, Lagos before dropping out after landing her first role.

Nigerian Celebrities Who Are Not University Graduates

Don Jazzy: The music don has definitely debunked the myth that you need a lot of academic qualifications to succeed in Nigeria. He is currently one of the richest Nigerian music producers and the CEO of Mavins Records.

He was formerly in the UK before arriving Nigeria to manage his father’s business. He was once a student at the university of Ambrose Ali University (AAU) Ekpoma, Edo State before dropping out in his first year. Things are definitely working out well for him and we are sure he does not regret his decision.

Mercy Johnson: The curvy actress did not see the four walls of the university. Born to a former naval officer father, Mr Daniel Johnson and Mrs. Elizabeth Johnson, she grew up in Lagos and is the fourth out of seven children. She started auditioning for movie roles before she clinched a slot in the movie “The Maid”, a movie which was to launch her to stardom and pave the way for more movies. She is currently one of the most sought after and most paid actresses in Nigeria.

The actress once revealed in an interview that she decided to start auditioning for movie roles because she became frustrated after failing the entrance examination (JAMB) several times. See how well things turned out for her. We are almost certain she is glad she failed the exams.

Wizkid: Starboy Wizzy’s career goes way back to when he was a child. He started singing at the age of eleven and his stage name was ‘Lil Prinz’ up until 2006 before changing it to’Wizkid’.

He was born unto a polygamous and inter faith household with his mother being a Christian and his father, a practising Muslim. He was once a student of Lead City University before dropping out in his second year.

2Baba: One of Africa’s music legend, 2Baba was born in Jos, Nigeria. He attended Saint Gabriela’s Secondary School Makurdi, Benue State. After his secondary education, he enrolled at the Institute of Management and Technology (IMT) Enugu, where he enrolled for a National Diploma Course in Business Administration and Management.

While still in school, he started performing at school shows and parties and other schools such as the University of Nigeria, Nsukka (UNN) and Enugu State University of Science and Technology (ESUT). He eventually dropped out of school.

He once said it was because he was robbed of all his CDs and recordings and then was so sad that he could not continue anymore.

Ramsey Nouah: Nollywood lover boy Ramsey Nouah does not have a university education. He was born in Edo state to an Israeli father and  Yoruba mother. He grew up in Surulere and attended Atara Primary School and Community Grammar School. He later proceeded to the University of Lagos to obtain a diploma in Mass Communication and that was the furthest he went.

Bisola Aiyeola: One of the most popular BBNaija House mates in the 2017 edition, she was the first runner up and the former host of the Top Ten Bill Board Countdown on Silver bird Television.

According to her, the reason she is not able to go to the university is because she is not able to afford the exorbitant fees (bribe) demanded from her whenever she secures admission. She is a mother of one and a fast rising Nollywood actress.

9ice: The ‘Kongaso’ crooner attended Abule Okuta Primary school and CMS Grammar School. He was quite studious and even proceeded to study law at the Lagos State University (LASU) before dropping out to focus on music. He also delved into politics and contested for House of Representatives in the 2015 general elections although he lost.