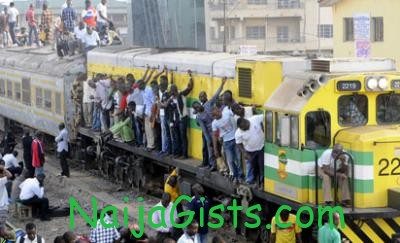 A middle-aged woman was on Wednesday hit and killed by a passenger train at Oshodi in Lagos when she was trying to avoid a puddle of water beside the rail tracks.

An eyewitness told the News Agency of Nigeria (NAN) that the unidentified woman was walking along the tracks when the incident happened at about 7:15 a.m.

.“The woman instead of jumping into the muddy water was trying to avoid it and the fast moving train dragged her under..

“In fact, her blood splashed on some passers-by who were also waiting patiently along the tracks for the fast moving train to pass before moving.

“Worst still, the train did not stop but dragged her body for about one kilometre thereby mutilating the body,” the witness said.

NAN reports that many of the passers-by were seen wailing on seeing the mutilated body of the woman.

On Sept. 20, a woman and her child were crushed to death while trying to cross the rail tracks at Oshodi.

“I think it is time the Nigerian Railway Corporation (NRC) management construct a barricade along the busy train tracks to avoid such occurrences.

“This is not the first time this kind of accident is happening, it has become an everyday accident,” Mrs Ronke Adelagun, a passenger told NAN.

Mr Felix Oguma, a trader at Oshodi, urged the management of the corporation to embark on massive campaign against indiscriminate trading and loitering around the train tracks.

“Many people are unaware of train movement in Lagos, so they cross the tracks indiscriminately,” Oguma said.

Adekanbi said that corporation had embarked on series of campaigns against indiscriminate crossing  of train tracks.(NAN)