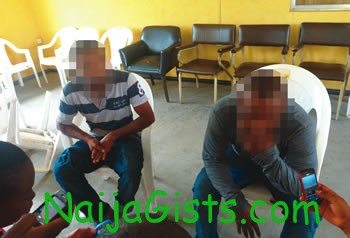 An unrepentant suspect, who operates in Enugu and Lagos, defrauding persons intending to travel to United States of America has been arrested by men of the Special Fraud Unit, Milverton, Ikoyi, Lagos.

The suspect who was alleged to have a peculiar modus operandi with patrons who are mostly high class ladies intending to school abroad, normally approaches his victims and establishes a relationship with them. He introduces himself as a senior system analyst in the Visa Section of the America Embassy willing to assist in procuring America Visa for his victims.

Luck ran out on him in April when he was arrested and charged to court for allegedly obtaining $15,615 from a victim in the pretence of procuring an America Visa for her.

After securing his bail in court he went back to defraud another victim with the connivance of an employee of a company and another of N4.9million to help process her admission into American University and procure a visa for her. The suspect hacked into some foreign telephone numbers, which he claimed belonged to Atlanta University and later used the numbers to contact the victim on two occasions to make his activities look genuine.

The suspect allegedly requested for another $4,100 which made the victim to suspect a foul play and subsequently report the matter to the police.

Speaking with CrimeWatch, the Commissioner of Police, Special Fraud Unit, Mr Tunde Ogunsakin, said: “The suspect is a fraudster who had engaged in serial fraudulent practices. He goes about with forged complimentary cards of the Embassy of United States of America and drives around in Enugu with different cars carrying diplomatic number plates. The suspect and his cohorts operate as a syndicate who specialise in defrauding ladies who desperately want to marry or travel to the United States of America.”

He advised Nigerians intending to travel abroad to apply to and procure visas from the appropriate embassies.