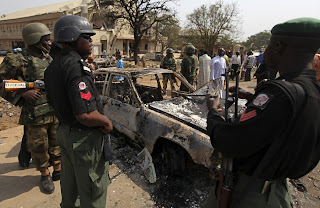 On Monday August 6, 2012, they bombed a police outpost in Shagari LGA of the state.

According to police sources, Boko Haram attackers came on motorbikes and attacked the police outpost with dynamites while firing at Officers around.

The attack scene is 70km from Sokoto town where 2 police formations were attacked few days ago.

No casualty were reported as at the time of this report.