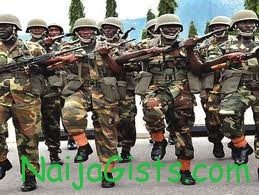 The Joint Task Force (JTF), Operation Restore Order in Borno said yesterday it arrested a high profile Boko Haram commander, one Mohammed Zangina in Maiduguri, the state capital. According to the JTF spokesman, Lieutenant Colonel Sagir Musa, Zangina, who was among the top Boko Haram leaders on the wanted lists of the task force was nabbed at GRA Maiduguri in the early hours of yesterday.

“The Joint Task Force Operation Restore Order has arrested Mohammed Zangina, a high profile Boko Haram Commander and Shura Committee member at about 12:30 a.m. yesterday, January 13, 2013 in the Government Reserved Area (GRA), Maiduguri,” Musa said through a statement. The spokesman claimed Zangina was in Maiduguri “to plan several deadly attacks against civilians and security personnel any moment from yesterday.

“Mohammed Zangina a.k.a Mallam Abdullahi often referred to as Alhaji Musa is the leader of the sect in the North Central part of Nigeria and Coordinator of most of the suicide attacks and bombings in Abuja, Kaduna, Kano, Jos and Potiskum. Zangina is a key member of the Shura Committee of the Boko Haram and he is among those declared wanted and a bounty N25 million was placed on him by the JTF on November 23, 2012.

He survived several security manhunts in his hideouts in Abuja, Kaduna, Kano, Jos and Potiskum. His arrest was effected by JTF troops following a special operation conducted in GRA, Maiduguri. He is undergoing interrogation,” Lt Col Musa disclosed.

6 thoughts on “Boko Haram Commander Arrested In Maiduguri By JTF”