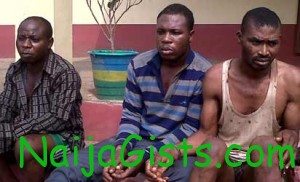 A 8-man robbery gang, which has been allegedly terrorising residents of Calabar, Cross River State, Southsouth Nigeria, has been smashed by the police.

Members of the 8-man gang were arrested  by men of the Atakpa Police Division located close to the popular Watt Market in Calabar and have been transferred to Diamond Hill, the Cross River State Police Command headquarters for further interrogation.

According to a source, “The robbers were arrested when two of the suspects operating in a taxi “picked a lady who had just withdrawn N2 million and took her to their hideout to dispossess her of the money. But some policemen who have been keeping an eye on the gang trailed them to the hideout and arrested them,”

According to our source,  those arrested included the producer of a well patronised sachet water whose factory is located at Mbukpa in Calabar South.

“This man also runs a big provision shop at Mbukpa, yet greed would not allow him to leave the robbery gang,” the source said.

The source alleged that the robbers are “well known in the police anti-robbery circle and many of their accomplices have long died from police bullets but somehow they managed to live and escape being prosecuted, courtesy of their lawyers, who free them each time they are taken to the court.” The robbery suspects, who all look well fed, are between 40 years and above.

“They have been in this for long but see how God does His thing that all of them have been arrested together,” the source said.

ASP John Umoh, who recently assumed duties as the Police Public Relations Officer for the command, said “investigations were still ongoing and the suspects are innocent until proven guilty.”

But Umoh confirmed that the suspects would be presented before the press today.