Posted on September 4, 2012 by Naija Gists Leave a comment 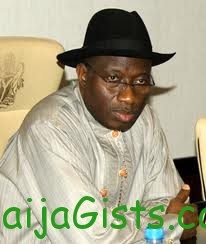 Our president, Goodluck Jonathan is ill at ease with his perception amongst the people he rules. Some days ago, he laid the blame for his woeful performance on the press and followed it up by asserting that he has lost faith in the Nigerian press to give a fair assessment of this administration. In its stead, he said his government is devising ways of assessing itself by which he meant that he wants to mark his own scripts and his report card. To give teeth to this, he launched what he calls his Ministerial Performance Contract where he and his government decides whether they have performed or not irrespective of how Nigerians feel. He was to quickly follow up some days later when he came out to assert that he is the most criticised president on planet earth.

One does not know the statistics from which he arrived at this self-damning confession. It is certain that he was tapping into Nigerian laboratory of self-fangled certainties where we generalise events and happenings in our small world and lend a planetary halo to it for effect. There is no disputing that our president is well mauled in the public space for his perceived shoddy approach to governance since he came, which has worsened our fate than before he came, waving the bandana of fresh air. So we must grant our president his self-confessed fate. But then, is the president not indicting himself by that assertion? Two things come out from that statement; the president has more foes than friends, if he believes that his critics are his foes, and again, his friends feel disappointed in how he is doing his task. Either way, there are more damning value in the statement than whatever benefits in terms of public sympathy the president wanted to curry by that statement. We remember very well that his predecessors like Babangida and Obasanjo made similar statements in the height of their reign so it is not original to him to express his discomfiture with the weighty criticisms against his handling of the ship of state.

Going further, our president couldn’t understand why his critics wanted him to solve the problems he rightly stated he did not originate. He wondered whether he brought about poverty, whether he started insecurity, whether he invented unemployment and the cocktail of problems his fierce critics are demanding him to resolve. He wondered if he was the person that started the decay of our roads, the complete defenestration of our energy and power sector, the worthlessness of our economy, the ravaging inflationary spiral, the cringing poverty in the land and many other problems that stare his regime in the face. I read through to see if he would mention kidnapping, which the fiends he is now patronising with millions of dollars created and which has mutated into an intractable leviathan of sorts but he chose to gloss over that.

But like the few defenders he has, he made the grievous mistake of substituting the disappointment of Nigerians in his handling of statecraft and their demand that things should be rightly done with the demand that he should wipe out age old problems that are as old as mankind. He makes the mistake of obfuscating the demand for good and accountable governance with his effort to create a caveat for his inaction. I don’t know if this was deliberate but he creates the impression that he is elected in office to just preside over the steady degradation of Nigeria and not arrest the noxious wheel, which governance entails. Nigerians walk away from Jonathan’s posture with the impression that he was elected into office to continue the ruinous path his predecessors charted and in this feeling they place the deterioration of the Nigerian state since Jonathan came to power.

All over the world, similar problems like the ones whacking Nigeria at present exist and the necessity of government obtains from the profound need to deal with these problems for the greater good of all. Few of these problems are meant to be finally resolved while most are meant to be reduced to the level they don’t threaten the well being of the citizens of a state. The degree to which a given government deals with these problems is a measurable rod that determines how it had succeeded within a given period of time. No one, in any part of the world, lays an expectation of a deux-ex-machina on any government to solve every available problem on ground. Not even in the most advanced countries is this impossible expectation laid on any government. This is a well understood creed that binds humanity- to the effect that governments ameliorate rather than eliminate every problem and this is not lost on Nigerians. Closely related to this is the belief that no one government creates or solves all the problems at a given space and time so government is conceived as a continuum, which adds value to the state at each given period. It would be difficult, if not impossible to see or hear any knowledgeable president in any knowledgeable society whelp the way Jonathan did about not being the inventor of problems because that, in itself, is an aberration.

So it may be from such awkward definition of his role that Jonathan promised us a shocker by 2013-four light months from now! No one knows the nature this promised shocker will come but if we take his earlier promises into consideration, then we may be hoping on nothing if we bank on his present promise. It may be that he drew from his perception that he is not there to solve problems he did not create that he is presiding over the worsening of the same problems. It is however germane to remind Jonathan that when he came, promising breath of fresh air, Nigerians were simply expecting him to improve on the sordid picture he met. They were not expecting anything extra-ordinary as to imbue shock on them. That they are not getting these simple expectations does not justify the shocker he is now promising. Yes, he may give us the shocker but let him meet the simple expectations first. The shocker may follow later.