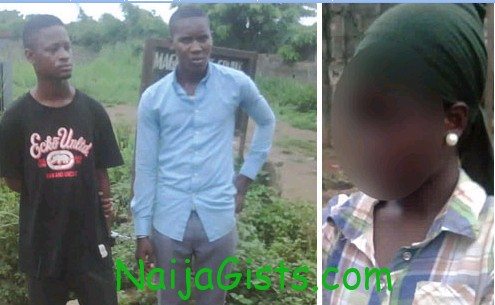 Two weeks to her wedding, a 25-year old woman(name withheld) was gang-raped by three friends who live with her in the same area in Ikotun, Lagos State, southwest Nigeria.

Her fiance has refused to proceed with the marriage since the rape incident.

The incident happened at a popular guest house in their area where the suspects tricked her and raped her in turns.

The police in Ikotun division have arrested two of the suspects identified as Benson and Ismali while Efe Oguntuwase who allegedly master minded it and involving two of his friends escaped.

They are now facing charges for the alleged conspiracy and rape at Ejigbo Magistrate’s court, Lagos.

The police brought Benson and Ismali to be arraigned before the presiding Magistrate, Mrs M B Folami who ordered the police to take them back to the station and bring them back the next day.

According to P.M, she lamented that she has lost her fiancé who has now cancelled the wedding and told her that he was no loner interested in the relationship.

She said she lives in the same area with Efe, who is popular in that area of Ikotun where he approached her for relationship.

She said she explained to him that it was not possible because she was already engaged and they were preparing for wedding.

She said Efe left after several attempts to woo her failed and she did not suspect he was planning any bad thing against her.

She said she was going home last week when Efe, who was sitting in front of the guest house near her house called her and she went to answer him, unknown to her he had planned to rape her.

She said she thought he had a serious message for her but was surprised when he forcefully dragged her into one of the chalets.

She said while she was resisting him, Benson and Ismali surfaced and threatened to kill her if she resisted and raised any alarm.

She became helpless and because of the threat she obeyed them and they took turns to rape her.

The matter was reported to the police and the two suspects were arrested while Efe escaped.