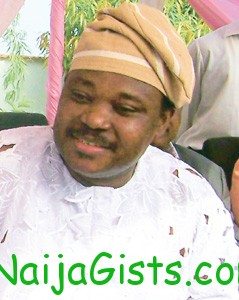 Barrister Jimoh Ibrahim looks set to fail again in his quest to rule the people of Ondo State after expending money running into billions of naira to pursue the ambition. This is not the first time Jimoh Ibrahim will travel the way. He contested for the Ondo State gubernatorial seat during the 2003 elections under the platform of All Nigeria People’s Party (ANPP).

He was said to have budgeted about N5 billion to pursue the ambition which saw him dropping by the side when the real players started surfacing at the election which was eventually won by Dr. Olusegun Agagu. He took a break from politics and did not contest the 2007 election, strategizing and looking for an ailing party he would highjack.

The opportunity presented itself after Agagu was booted out leaving his party the People’s Democratic Party (PDP) in a state where they needed revival. Relying on thee power of his money his money Ibrahim quickly switched allegiance to the party with the belief that thefederal might of the party would present him a better chance of achieving his long-term ambition.

He has since then been spending and taking care of the party; his albatross, however, is his love for ailing businesses which he usually helps prepare for final extinction. He applied for the Ondo State-owned Owena Motels which was facing serious problems then with the promise that he would restore the place to its lost glory, a promise he failed to fulfil but for the intervention of the state government which swung in swiftly to reclaim the hotel from the claws of the man they call “undertaker.”

The way he handled the hotel now opens the eyes of the people of the state to the administrative incompetence of the man who hopes to run for the Alagbaka office of the governor come next election under the PDP. To compound issues for him, his party which is expected to be the main opposition the Governor Mimiko’s Labour Party (LP) has been pushed into the background while the Asiwaju Bola Tinubu-led Action Congress of Nigeria (ACN) has grown to become the main opposition in the state.

All these, coupled with his unpopular status among the people of the state is forcing the chieftains of the PDP to have a rethink over allowing him to run under the party’s platform, which may have further pushed his ambition into the shadows. And the fact that he has spent billions for the party since he decamped may be a double tragedy to the Akoko-born businessman.