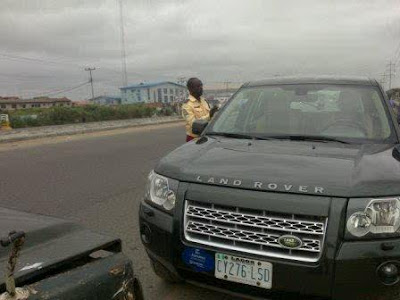 Scene of the incident

LASTMA GM, Babatunde Edu who confirmed the story said the deceased was carrying out his official assignment at his duty post at Mega City, Ajah area of Lagos before he met his untimely death.

He said the driver fled the scene after crushing the LASTMA official to death, adding that she was
later arrested with the help of the Area J Commander, ACP Felix Vwamhi.

He said; “The suspect whose identity was revealed by the Auto Inspector device as Yinka Johnson a staff of IBTC drove in a Green Land-Rover Jeep,SUV with registration number plate, CY 276 LSD against traffic from Mega chicken inward toll Plaza Two. ”

She was intercepted by three officials of LASTMA led by the Head of Operations, Mr Quayum Asafa for traffic violation and in a drama like scene, Johnson started driving recklessly in order to escape contravention and in the process ran over the officer. ”The deceased was rushed down to Germaine Hospital where he later died as a result of injuries sustained from the accident while the corpse was deposited at the Lagos State Teaching Hospital, Ikeja for autopsy.”

Edu said the female banker on realising what she has done, ran and escaped from the scene of the incident into Ikota Estate, Ajah with the security men shutting the gate permanently. He said: “The situation became riotous as the security attached to the gate refused all pleas to open the gate until the intervention of the Area Commander in charge of Area J, Mr Felix Vwahmi, mobilised and called for backup before access could be gained into the Estate.

”The suspect was finally arrested and taken to Ajiwe Police station from where she was transferred to the Criminal Investigative Department, Panti for further interrogation.”

One thought on “Female Banker Kills LASTMA Official In Lagos”