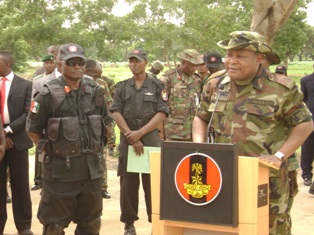 A Nigeria army captain has been killed by armed bandits in the northern western Kaduna area of Birnin Gwari area.

Security sources in the area said the officer fell victim to a well-organized ambush in Kwasa-Kwasa village, about eighty five kilometers from Birni Gwari.

Saharareporters previously revealed that a criminal gang domiciled in a thick forest in the area has placed several villages under siege, killing villagers and local vigilantes who attempted to resist their looting and burning activities.

Our sources say the number of soldiers, policemen and local vigilantes killed so far by the armed groups has not been ascertained. It is also unclear if the group that is terrorizing the Birnin Gwari area has any connections with Boko Haram, the Islamic militant group that has been on the run since a state of emergency was declared in three northern states of Nigeria about three weeks ago.