A woman named Hajia Fati Ali who recently embarked on a business trip to Abuja has been incapacitated by a trigger-happy Nigerian policeman for a reason yet unknown.

The woman is lying in a state of Coma at Abuja National hospital with a bullet lodged in her brain.

See her picture below 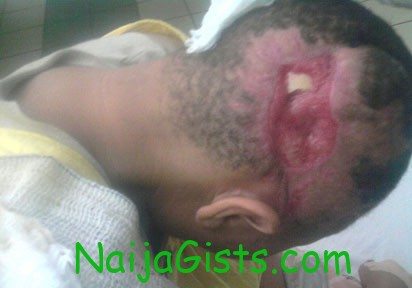 How Hajia Fati Ali Got Injured

If she had known that her decision to accompany a her family friend, Kabiru Mohammed, from Kaduna to Abuja was going to cause her excruciating pains, Hajia Fati Ali would have boarded a commercial vehicle direct to her destination March 31, 2012, as she had always done in the past.

She had prepared herself and was ready to hit the road for Abuja  when Kabiru, who resides in Kaduna and was travelling to Abuja that day, informed her that he was going her way. She felt going with him was not only going to give her comfort but  also reduce her transport expenditure.

Even when Kabiru informed her that he was not only passing through Minna but would also spend a day in the Niger State capital before proceeding to Abuja the next day, Fati was still at home; they both left Kaduna for Minna.

No sooner had they arrived Minna after over three hours journey than they learnt that one of their family friends lost a relative. They  both decided to pay their condolence. But as they were returning to where they wanted to pass the night after the condolence, tragedy struck. A trigger-happy policeman at a check point fired gunshots at their vehicle as they made to pass after being searched and cleared  to move.

As Kabiru turned to find out what happened, he saw his companion in a pool of her own blood. A bullet had hit her. The bullet  lodged in Fati’s brain. It was a shock to other policemen at the checkpoint that one of their colleagues went that far. They rushed Fati  to the General Hospital, Minna but was later transferred to the National Hospital, Abuja on discovering that the situation was beyond their control.

Niger State Government, contacted on the ugly development through its Permanent Secretary, Hospitals Management Board, Alhaji Ibrahim Taffin, promised it was going to foot the hospital bill but, three months after, no government official, according to the victim’s elder brother, Adamu Sadiq, has been sighted.

Since her admission at the Female Ward, National Hospital, Abuja, three surgeries have been carried out on her brain with a view to removing the bullet but these have proved unsuccessful.

The family said it had outstanding bill of over N1.3 million at the hospital, disclosing that the bill was still running just as Fati’s case seemed to  have no solution.

According to Sadiq, surgeons who carried out the surgeries to remove the bullet from the victims’s brain  said the situation is better handled abroad.

Niger State Police Command, whose personnel was allegedly responsible for the tragedy, has not shown any concern about the development.

The victim’s brother also expressed dismay at the attitude of their family friend, Kabiru, saying he had abandoned them to their fate.

“He was the one negotiating with the Permanent Secretary in the Niger State Hospital Management Board for the release of money which the state government promised for the victim’s  medical bill but eventually stopped communicating with us. As a result, I had to follow up by calling the Permanent Secretary myself but have not been given any positive response till now”.

Following this development, the family, according to Sadiq, planned to seek redress in the law court.  The family has approached the Legal Aid Council to help on the matter(vanguard).

Which kind evil is this? Nigerian Police officers often take the law into their own hands.

Who is safe in this country?