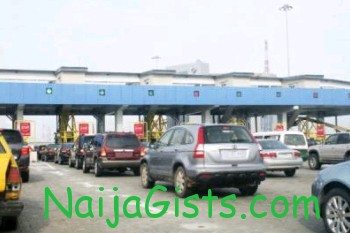 The decision of the Federal Government to re-introduce toll gates on federal highways is another policy somersault like the many we have witnessed over the years.

When last year the chairman of the Federal Road Maintenance Agency, Ezekiel Adeniyi, said the Federal Government will soon re-introduce tollgates on federal roads across the country, we thought he was feeling the pulse of the citizens and we were right as the Works Minister confirmed a few days ago that the decision, was made to guarantee regular maintenance and sustainability of those roads.

Mike Onolemenmen the Works Minister confirmed the decision while on a tour of the Lagos-Ibadan Expressway that the toll gates would be introduced to generate funds to maintain these roads but we ask: Is this decision in the best interest of Nigerians? Is this tolling on federal roads not just another job for the boys?

In January 2004, the then head of state, President Olusegun Obasanjo ordered the dismantling of the toll gates, tax payers coughed out N360 million for the exercise. Dismantling those toll gates on federal highways was one of the Obasanjo administration’s palliative measures after increasing the price of fuel.

The idea of tolling roads is not bad in itself as it is a global practice but how do we ensure that the revenue that accrues are utilised in a reasonable manner? How do we avoid the despicable corruption that goes on at toll gates owned by government? Who would monitor these toll gates and prevent them from becoming another exercise in waste as many others have become?

The idea of Public Private Partnership, PPP, to sustain infrastructure nationwide is welcome but how do we ensure that Nigerians are not unduly exploited by these capitalists whose sole aim is making huge profits to the detriment of the masses. How do we ensure that money made from tolling on these federal highways are used to maintain them?

Already, all over the country, most highways have gone bad. Many have over the years been neglected while money voted for their maintenance has ended up in private pockets. These roads have become death traps and very few of them have been repaired. Even the so-called repairs carried out on some of the roads are laughable as the roads go bad again when the rains begin.

While we welcome the idea of paying to use federal highways, we need to take another look at commercial vehicles and those who use them. We need to think about the effects of tollgates on the price of goods, especially foodstuff from the northern part of the country.

Travelers too may have to cough out more as drivers of commercial vehicles are not known to be considerate when it comes to paying more for making a trip.

Nigerians would have to pay the tolls on federal highways after having endured every other humiliation by the federal government.

Before these toll gates are introduced next year, government needs to repair all federal highways on which tolls would be collected. The government also needs to put in place a mechanism to ensure that monies from the toll gates are not embezzled by some corrupt government officials while the roads are left to further deteriorate.

These roads also need to be constantly monitored to make sure they are always in top form, or how do you justify collecting tolls on bad roads.

Government also needs to change its attitude in terms of responding to decaying infrastructure. Many of these roads did not go bad in one day and though it votes considerable amounts yearly for their maintenance, it does not monitor how the money is spent or if those roads are repaired.

What we need is attitudinal change. If government is serious about changing the way things are done, its workers cannot but do the same. The way Federal highways all over the country went bad is just a reflection of other aspects of our lives and we need to stem this drift.

Taking the people for granted has become a way of life for governments, especially in Africa. If the citizens are ready to play their part, why would government back out of the agreement?

We expect that by the time the toll gates are erected and become effective next year, all federal highways are already repaired with a standby crew to handle bad patches before they become major problems. Nigerians are tired of being taken for a ride. source