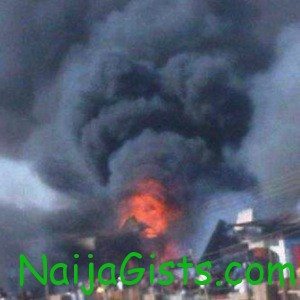 Three men suspected to be members of Boko Haram sect have died this evening when the explosives they were conveying exploded at Ahmadu Bello Way / Lugard-Alkali axis of Kaduna, Kaduna State Nigeria. naijagists.com

According to eyewitnesses of the bomb explosion in Kaduna today, three dead bodies were spotted at the scene.

The explosives being transported by the suspected Boko Haram members exploded in transit killing all of them instantly.

They were killed before killing innocent people. This is just the beginning.