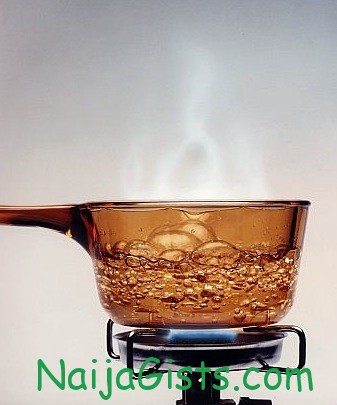 A woman has allegedly bathed her 11-year old househelp with boiled water and inflicted serious injuries on her body at Igando area of Lagos State, Southwest Nigeria. naijagists.com

The woman, Caroline Akam, has been arraigned by the police at the Family Court, Ikeja.

The victim, a girl (name withheld) is in  pains as  some part of her body  are badly scalded.

Esther Child Right Foundation, ECRF, a non-government organisation rescued the girl and got the woman arrested by the police for gross child abuse.

According to a statement obtained from the victim by the Director,  ECRF, Mrs Esther Ogwu, the little girl  complained that on 24 August, she was allegedly beaten by her boss after which hot water was poured on her body because she did not wash plates.

The victim, who is related to the woman’s husband, was also quoted to have said that her boss usually  gives her  stale food  different from the one she gives her children.

It was alleged that the victim was also beaten thoroughly on 29 August, 2012 with a big stick which resulted in injuries on her head with blood reportedly gushing out.

It was that same day that ECRF came to her house at  8, Pastor Olusola Street, Igando to rescue the child.

According to Ogwu, the NGO acted swiftly when it got tips that there was a case of child abuse at Igando area.

She said after hotwater was allegedly poured on the girl, she was kept indoors for about a week so that no one would notice the injuries on her body.

At the court, Mrs Akan, denied she poured hot water on the girl’s body but when  the girl was asked to remove her clothes, there were deep wounds on her body.

The girl has been taken to Cross River State to her parents to avoid maltreatment.

Caroline was granted bail  but had to spend sometimes in prison before she was bailed out and the case adjourned till 4 October, 2012 (pmreport)