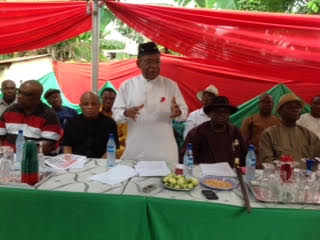 WE HAVE NO ALTERNATIVE THAN UDOM EMMANUEL: Chief Nduese Essien

In a wake to sustain unity and impressively large rooted structure of the peoples Democratic Party -PDP, Stakeholders in Eket yesterday gathered in the residence of the political leader of Eket / Senatorial Leader, Rt. Hon. (Chief) Nduese Essien; to reignite and harness the political atmosphere in the course of accommodating a grass-root Chairmanship aspirant with passion and foresight capable of attracting development as well promote and defend policies and programs outlined by His Excellency Deacon Udom Emmanuel.

The meeting which was highly rated in attendance and personalities started with a brief sermon by the SSA to Governor Udom on religious Affairs, Reverend Daniel Akwatang; in his sermon, the Governor’s spiritual aide while quoting from the book of
(1st Peter 2:13.) urged Stakeholders to be pragmatic in supporting and showing respect to the administration of Governor Udom Emmanuel as a sign of good leadership by not limiting their intellect to be brained washed by rumours capable of discrediting the unified PDP family and excellent scorecard as exhibited by the Governor. 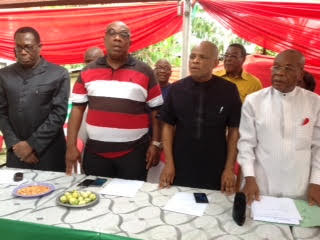 In an opening speech, the host, Chief Nduese Essien; emphasised the need for Governor Udom to be given the mandate to complete 8years term Governorship slot of Eket Senatorial District.

The former House of Representative lawmaker/Minister of the federal Republic who double as the Senatorial District political leader commended Governor Udom’s resoluteness and indefatigability in upholding to his campaign promises by giving Eket the aged long dreamt metropolitan city which is chronicled in the Eket Urban remodelling projects.

In his words “This meeting was arranged for the purpose of assessment and reaffirmation of our mandate and confidence as a result of the Governor’s sterling feats and purposeful leadership; we can only achieve the greater part of democratic dividends under Udom Emmanuel as Governor should the ambiance of peace and harmony is mandatorily embraced by stakeholders from Eket LGA”.

In his usual admired sandwich oratory, Hon. Frank Archibong; TC Eket / Algon chairman AKS thanked the political leader on his undeterred advocacy for Udom’s second term project.The chairman urged all stakeholders to cooperate with the PDP and Governor Udom to enable Eket people have a good share of democratic dividends.

Hon. Frank Archibong whose presence in the meeting was like the entrance of the messiah promised to remain faithful and reliable in the discharge of his duties without an iota of sentiment. “even as I sympathise with the women over the temporal relocation of Urua Offiongetuk market due to expanded development; let me seized this opportunity to appeal to all and sundry to embrace every design plans of government for Eket people especially the 55.1km super highway facilitated by the Hon. House Member, Hon. David Lawrence”.

The House Member representing Eket State constituency, Hon. David Lawrence in his goodwill message called on the people of Eket to remain fervent in supporting the Governor under the platform of PDP. The lawmaker whose effective representation has contributed immensely in boosting governments efforts in the pace of development posited that the city of Eket will be renewed with a metropolitan facelift on completion of the remodelling projects.

Hon. Lawerence reiterated his loyalty to the PDP and the administration of Governor Udom Emmanuel outlined his representation to have cut across ICT, human capital development, empowerment etc.

The House member posited that followers can only be attracted by leadership style displayed. He stated that In the course of attaining the 21st century standard in Information communication Technology (ICT), as targeted by the Governor, over twenty persons are undergoing various specialise training under my sponsorship to portray my alignment with the dakkada philosophy.

The lawmaker, added that he is constructing a fully equipped ICT resource centre which will have three persons from each wards nominated and trained as professionals and this can only become a reality if we give our support and mandate to Governor Udom Emmanuel come 2019.

Corroborating the above assertions, Barr. Akpadiaha Ebitu; PDP State Treasurer advised that campaigns for the forth coming council elections will not deviate from the PDP constitution and the electoral guidelines that will emanate from AKISIEC.

In a goodwill message, the chapter chairman of PDP, Obongiwaad Emman Mbong; stated that the governor and the political leader have performed beyond expectations.

Emman Mbong reaffirmed that the party PDP, will not lose grip of its members across the wards promising that each ward will begin proper and active administrative roles to foster growth and spread. Obongiwaad also cautioned youths against thuggery stressing that the purpose is to ensure a levelled playing ground for a more worthy and acceptable candidate as well peaceful elections when the time comes.

Obonganwan Comfort Enondien; speaking on behalf of the women thanked the Governor for carrying the women along in his affairs and programs. She however appealed to the women not to relent effort in supporting the good leadership of Hon. Frank Archibong while pleading with the stakeholders give Hon. Frank Archibong all necessary support to enable him deliver as he has already begun.

After an analytical assessment and deliberations on the achievements recorded in Eket by Governor Udom Emmanuel, the stakeholders unanimously within the confines of practical intertextuality of leadership moved a motion for a vote off confidence / reaffirmation for the endorsement of His Excellency Governor Udom Emmanuel for another term of four years after 2019.

The motion as moved by a cerebral academia, professor Nssien Etuk was however given the populace consent and adoption while, The Hon. Member Representing Eket State Constituency in the Akwa Ibom State House of Assembly, Hon. David Lawrence seconded the motion ceremoniously.

This was contained In a duly articulated motion moved by Rtd. General Anthony Etukudo; The learned retired army general in his motion which was seconded by the PDP chapter chairman, Obongiwaad Emman Mbong; described Chief Nduese “as a pragmatic leader with a golden heart possessing rare leadership characteristics”.

In his remarks, Chief Nduese Essien acknowledged all speakers and stakeholders with a promise that he will continue to work as tirelessly as he has always been working.
The former minister also promised to restore the sanctity of leadership with the assurance that the unity and development of Eket people vis – a- vis Udom Emmanuel second term will not be compromised.