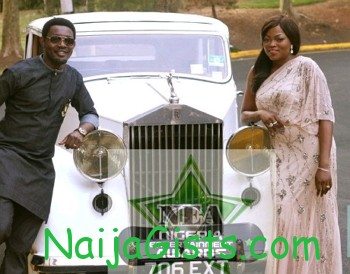 Naija Entertainment News is the center of attention when it comes to knowing the current happenings in the life of our star. naijagists.com

Nollywood has been waxing stronger in recent times. We can be sure if there is one valuable commodity we can expect to export out of this nation, then it must be our movies most of which focuses on the Nigerian heritage and cultures of the good people of this country, and the continent as a whole. Indeed, a lot has been happening in the Nigeria entertainment news.

Read on while you continue to enjoy some of the top recent Naija celebrity gossip we will discuss with you here.

2Face Confesses that He always wants to be Around Annie

Nigeria Entertainment News gathers that popular Nigerian music star, 2Face Idibia, has in a recent interview confessed to the world his love for his darling wife, Annie Macaulay, which always makes him want to be by her side. According to him, the love he has for Annie is a special type as he is confident he can cope with her. He just wants to be by her side always. When he isn’t by her side, it is like a greater part of him is missing.

Recently, Naija Entertainment News Update gathered that one of the followers of the pretty damsel, the Nollywood star Omotola Jolade, accused her of not accepting to date her when she was a student at the Command Secondary School, Kaduna. We would remember that the actress, now mother of four, spent some of her growing up years in Kaduna, a state in the Northern part of Nigeria.

Many weeks ago, news of the Yoruba actress, Taiwo Aromokun, getting married in London to a London-based lover Olayemi Abimbola, rented the air. Naija entertainment gist gathers that the actress claimed that most Nigerian men based in Nigeria were only interested in use and dump relationships with top celebs like her, hence the reason why she decided to go abroad to find her Mr right. However, events have taken a dramatic turn so far.

Naija celebrity gist investigations reveal that Taiwo’s newlywed husband is a loafer with no known legitimate job in the UK. Further revelations show that Olayemi already has two kids from a Dutch woman by name Suriname. Even Suriname doesn’t appear to know of his secret marriage to Taiwo. The first son is over 6 years old now as Pasuma was invited to perform at his first birthday some years ago.

Naija entertainment gist sources claim that Taiwo’s hubby has been in Holland for almost one and a half decades. At a time, he was hiding from the Dutch authorities to escape being deported to Nigeria because his papers had expired. But luckily for him, the Dutch government was kind enough to grant amnesty to all illegal immigrants who had stayed in the country for more than 10 years. With the amnesty though, Naija Celebrity Gossip discovers he may not enjoy full rights and privileges given to a citizen of the country or someone who has the Dutch passport it is just that, he can live freely in the country without having to run away from the authorities like he used to in the past!.